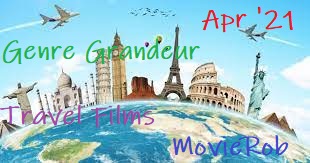 For this month’s next review for Genre Grandeur – Travel Films here’s a review of 2001: A Space Odyssey (1968) by James of Blogging By Cinemalight

“The Ultimate Trip” is how the 1972 re-release poster slugged the movie. And I’ve found no other film to replace that definitive exaltation…so far, anyway.

1. It completely does away with the three-act play structure that hems in most films. It’s four acts—like a symphony.

2. It contains very little dialog, and insists on telling its story (about discovering extraterrestrial life) and providing key dramatic information visually and aurally—something that too few films actually try to do–fully utilizing the strengths of the medium.

3. It dispenses with the traditional sense of screen-acting which depends on emoting high-points (which is not standard drama, but is, in fact, melodrama), that has long been the crutch of what is considered great screen acting.

4. It comes up with a rather nifty solution for the Evolution versus Creation argument, which is: “Why can’t it be a little bit of both?” Trust Kubrick to answer a question with another question.

5. It is that very rare item in movie history—a true Science Fiction film. It is not a standard genre film (ie. a western or detective story) set in the future with gadgets, like Star Wars or Close Encounters or Blade Runner or Outland or Forbidden Planet. There are no comfortable, reliable concepts in 2001. It asks audiences to consider the inconsiderable and make leaps of knowledge and faith. And it doesn’t wait for that audience to catch up, despite protestations of a “glacial” pace.

6. It obeys the rules of space and uses them dramatically. There is no sound in space. Trips in space take a long time. Isolation is a problem. Don’t get caught without your helmet. Ask your computer how it’s doing every so often. When you’re dining over at a stranger’s house, don’t break the crystal. If a black monolith crosses your path, don’t reach for it unless you’re prepared for your life to change. Rules like that…

7. It takes advantage of the one unique element that separates film-making from any other art form, and presents the single greatest edit in movie history.

My Dad took me and my friend Jerry Fortune to see 2001: A Space Odyssey on my thirteenth birthday. I was a space kid. I lived and breathed the Apollo program. I knew every Astronaut’s name and every mission. What went right and what went wrong. The names of landing sites and prominent craters nearby.

But I couldn’t make heads or tails out of this movie. Like my father, I “liked the middle parts,” but I couldn’t figure out what was up with “the monkeys”, what all that weird screaming was about, what was with those streamers when they got to Jupiter, who was the old guy and what was that baby at the end?

I was determined to figure it out. It was a space-movie for cryin’ out loud. And, at that time, they only came around once in a blue moon (the last being Planet of the Apes, hardly a space-movie) and I wasn’t going to waste this one.

So it made me dig. I researched. I found out it had to do with the search for extraterrestrial life (it did?), then I read Clarke’s book, and although Clarke and Kubrick deviated quite a bit, it let me in to what Kubrick was trying to communicate.

Then I got it. It made me realize why he did what he did, why he chose particular scenes to portray, why he framed shots the way he did, and what he could get away with without making his movie look stupid. For Kubrick, a suggestion was better than hitting you over the head by showing bug-eyed children in baggy suits and rubber masks ala Spielberg. There was no narrator to tell you what it all meant (Kubrick had cut out a prologue of talking heads discussing E.T. concepts). The film-maker trusted that his audience would figure it out. Some did. Some just liked all the colors.

And it left a lot of people (including one thirteen year old and a good number of complacent critics) in the moon-dust.

It still boggles this mind that Kubrick was able to take Arthur Clarke’s slim concept in “The Sentinel” (alien beings leave a “burglar” alarm of sorts on the Moon), and take it to a logical beginning, wrap it in mythic proportions and take it to an inevitable, and, for me, heroic, end. It still is one of the few movies that purport to be science fiction with a deep sense of mystery and wonder, even a kind of visual poetry–something its sequel, the literal-minded 2010, dispensed with to its drab, short-shelf-lived detriment.

Where did that inspiration come from? How did those concepts appear? For me, the movie fits the description of the Black Monolith in the film (and are its last spoken words) “It’s origin and purpose, still a total mystery.”

I may have seen 2001: A Space Odyssey over a hundred times, and it never, ever bores me or fails to thrill me.

Such is the power of this movie over me.