For this month’s next review for Genre Grandeur – Travel Films here’s a review of Master and Commander: At the Far End of the World (2003) by  Vinnie of Vinnie H.

Let’s see what Vinnie thought of this movie:

A sensational adventure drama with a great attention to detail, fine direction and two sterling central performances, Master and Commander: The Far Side of the World is hugely entertaining while still holding inside a depth that you wouldn’t expect.

It’s 1805 and the Napoleonic Wars are in full swing.

The experienced and charming Jack Aubrey( Russell Crowe)is captain of the HMS Surprise. At the orders of the British Admiralty he is taking his ship off the North coast of Brazil to intercept a French ship by the name of the Acheron. It’s feared that if the Acheron continues its journey , the wars will spread further and last longer . Aubrey and his crew are surprised when fog rolls in and the Acheron ambushes them, severely damaging the Surprise. It’s a much bigger ship that is more heavily armed and stronger than the Surprise. The crew have to fix the ship while at sea, which poses a challenge for them. For Aubrey, the mission becomes personal as he begins to push the crew harder and starts to display questionable tactics and a foolhardy attitude while in pursuit of the Acheron . He has the crew attempt to track the much bigger and elusive ship against the seemingly insurmountable odds. This puts him at sixes and sevens with everyone, most prominently the ship’s surgeon/ naturalist and confidante Stephen Maturin( Paul Bettany) who argues that his good friend is risking the lives of the crew and not following the code of conduct by which he usually governs by. The journey around South America and the Pacific Ocean to find the continues as much in the way of bad luck befalls those present aboard the and Aubrey’s single mindedness elevates. Once the Acheron comes into view again, but with the crew paranoid and the Captain’s ways beginning to challenge those in his care, it’s not going to be plain sailing for anyone involved

The talented Peter Weir is on fine fettle directing this adventure on the high seas thats both thrilling and engaging. He combines the epic scope of an adventure film with the sense of intimacy you think of with drama. While the whole exercise is beautifully mounted, it’s the little moments that really matter here. 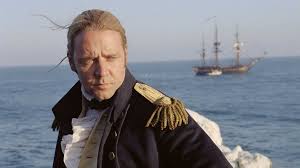 And we do bear witness to a compelling literal and figurative journey of morality and leadership, beautifully brought to life by Peter Weir. Master and Commander was filmed on two replica shops, one that was actually used on the sea while filming. Both add a further authenticity to events and truly place us at the heart of this journey. Plus, they truly convince as a living vessel of cramped conditions, doubts and thundering action. Once again, Weir and his exceptional crew of production designers really went for painstakingly true to the time period details that are sublimely realised . There’s a revealing side that displays the frictions, rivalries and bloodshed( though most of it is discreetly shot). As most of the film takes place in the ship, it becomes alive with all the emotions running through it from the characters. When one thinks of Master and Commander, there are two main action sequences in it, which might surprise many. But the sequences are stunningly orchestrated and full of danger, while not sugarcoating the often brutal reality of war and how damn unpredictable it can be. The opening out of the blue attack hits hard and unexpectedly while the ingenious final battle is a full on thrusting sequence of action and tactical one upmanship.A few parts in the middle sag but is largely a very involving movie, particularly pertaining to the characters and visuals . The sound editing which is thunderous and immersive and the cinematography that gets across the conditions aboard a ship and the natural beauty of the sea both received deserved Oscar wins. The sound design in particular is truly marvellous; every crack and shot of a canon rings with energy and fire The scenes in the are breathtakingly beautiful and a feast for the eyes so all lovers of stunning imagery should take note during these sequences, and the cinematography from Russell Boyd is gorgeous. The score from Iva Davies, Christopher Gordon and Richard Tognetti is an adventurous one that really suits the story and has the same amount of energy and drama that is depicted on screen.

Russel Crowe heads the cast of the seafaring adventure with an absolutely entertaining performance. The dashing leadership, cheeky grin and then the realisation and sense of shock that comes with making big, life threatening decisions are all there and embodied by Crowe. It’s a full blooded portrayal of a rash but dedicated man serving his country and running into a questionable quagmire of which some is his own making.

A delightfully subdued, dependable and cynical performance from Paul Bettany as the surgeon/naturalist Stephen is also of note for how effectively he slips into the part. Maturin is the more practical, rational one of the two but also boasts a deep sense of questioning curiosity that can’t be harnessed. Bettany brilliantly conveys all of these parts and really makes the character his own. It helps that Crowe and Bettany work so well together and boast a great chalk and cheese chemistry that lends an extra string to its bow. The friendship between the characters is one of the best parts of Master and Commander it has to be said. James D’Arcy makes for a stalwart supporting character playing the loyal first lieutenant, while Lee Ingleby is sensational as the tragic Midshipman who is unliked by the rest for his lack of nerve and suffers deeply because of his treatment. Young and spirited Max Pirkis stands out as the pint sized midshipman who loses an arm early on, but has enough tenacity to overcome this obstacle. Pirkis has a maturity that belies his young years and he more than holds his own against most experienced costars. The overall cast of the film is of a good standard, but it’s Crowe and Bettany that you’ll remember the most.

A surprisingly human adventure with questions of morality and order in at as well as spectacle, Master and Commander: The Far Side of the World is a fine achievement in filmmaking.

One thought on “Genre Grandeur – Master and Commander: At the Far End of the World (2003) – VinnieH”