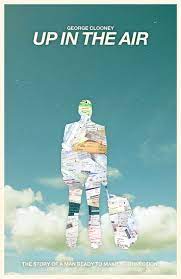 “Life’s better with company.  Everyone needs a co-pilot” – Ryan Bingham

Brief Synopsis – A businessman who spends most pf his life traveling from city to city firing people has his life turned upside down when his company chooses to discontinue his work and have it done virtually instead.

My Take on it – Such an amazing film that works so well.

George Clooney is perfectly cast in the lead role and makes us truly believe that his character believes that the kind of lifestyle he lives is perfect.

The arc that this character has over the course of the film is quite fascinating to watch because we can understand the how and why things change for him along the way.

The script was written by director Jason Reitman and is so powerful because they are able to give the viewer a glimpse into how this kind of lifestyle works, but once the layers are peeled open, it’s easy to see how empty things can be underneath.

The supporting cats is also great with Anna Kendrick, Jason Bateman and Vera Farmiga adding so much to the way things move along.

The chemistry between Clooney and Farmiga is amazing and they feel as if they each have found their other half because they are so similar in everything they say or do here.

This film was deservingly nominated for 6 Oscars – Best Picture, Best Director, Best Actor (Clooney) Best Supporting Actress (for both Farmiga and Kendrck) and Best Adapted Screenplay, yet unfortunately didn’t manage to win any of them.

The realistic feel of the film is extraordinary and helps keep things so grounded along the way that we can feel for everything that these characters experience along the way.

MovieRob’s Favorite Trivia – A large number of the people we see fired in the film are not actors, but people who were recently laid off. The filmmakers put out ads in St. Louis and Detroit posing as a documentary crew looking to document the effect of the recession. When people showed up, they were instructed to treat the camera like the person who fired them and respond as they did, or use the opportunity to say what they wished they had. A way to discern who are the actors, and who are the real people, is that the real people do not have dialogue with George Clooney or Anna Kendrick, as they were shot separately. Jason Reitman did this intentionally, feeling that the real people would freak out Clooney and Kendrick. (From IMDB)