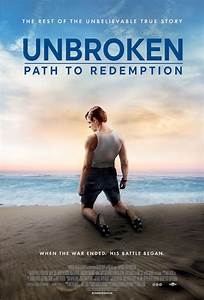 “Miracles didn’t save me Padre, a couple of Atomic Bombs did that.” – Louis Zamperini

Brief Synopsis – Based on the life of Louis Zamperini following his return to the US after World War II and how he searched for some kind of direction in life.

My Take on it – This is a film that I was very curious to see after enjoying the original story of Zamperini’s war experiences in Unbroken (2014).

Unfortunately, the way that things are presented here, leaves much to be desired.

The story is presented in a very superficial way and the redemption and faith that this character aspires to just never comes across in a more realistic manner like it should.

The fact that the main character and director are not Jack O’Connell and Angelina Jolie already says so much because even they weren’t especially please with the script of this sequel.

The story is far too preachy in its message and fails to be more powerful and believable in all that they try to do here which is quite disappointing to watch.

The story doesn’t feel original enough and it seems to follow the path of many other movies that have similar plot lines and characters seeking redemption following their return from war.

MovieRob’s Favorite Trivia – The sequel did not include cast members Alex Russell or Jack O’Connell as Louis “Louie” Zamperini, nor his brother Pete, either due to scheduling conflicts or they were not available at the time of filming. The replacements are Bobby Campo as Pete and Samuel Hunt as Louie. It also had no involvement of Angelina Jolie as director or Legendary Pictures and Universal Pictures as its distributors. Pure Flix Entertaiment and director Harold Cronk replaced them. (From IMDB)

Genre Grandeur Worthy? – Not at all. The story comes across as being far too preachy in its message and fails to really work.