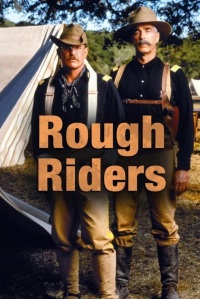 “[to Nash, grabbing his throat] Nash! Where were you the night Roosevelt came in? Hmm? I know you are and I know what you did. You should have got out while you had the chance, because you ain’t getting out now. If any of my men dies because of you, I’ll have you pulled apart by horses! Understand? Savvy” – Capt. Bucky O’Neil

Brief Synopsis – After the break out of the Spanish American War, Teddy Roosevelt leads a group of volunteer soldiers into Cuba.

My Take on it – This is a movie that I saw on cable a few years after it came out and was fascinated by the way that it was done.

Tom Berenger is superb as Teddy Roosevelt and really gives a powerful performance as this larger than life figure before his ascension to the Presidency a few years later.

The way that they present a military boot camp from over a century ago is done quite well and helps keep things moving in a great direction.

Love the way that they show the various characters from different walks of American life at the time needing to work together as the military force is culled into a congealed fighting force no matter the background of each of the volunteers.

The fact that this is based on a true story adds so much to things because it allows the characters and the story to be even more powerful in everything that they do here.

MovieRob’s Favorite Trivia – John J. Pershing did fight alongside T.R. and his career benefited from the relationship. It took over two years after the battle for the Army to promote Pershing to Captain (although he did serve as an acting Major during those years.) Roosevelt wanted him advanced to colonel for his merit, but the Army refused all attempts at early promotion over more senior officers. Finally, in 1906,Teddy exercised his prerogative to nominate general officers by making Pershing a Brigadier General, thus bypassing the Army promotions board and jumping him over three intermediate ranks. (From IMDB)

Genre Grandeur Worthy? – Come close. The story is great, and it is told in an enjoyable way, but they still leave the viewer hoping and expecting far to much more.