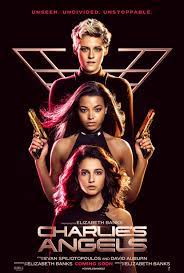 “We probably shouldn’t get caught standing over a dead body.” – Jane Kano

“[dirty after fight] Not dressed like this, no.” – Sabina Wilson

Brief Synopsis – The angels are sent to try and stop a dangerous technology from being used.

My Take on it – This is a film that I actually wasn’t looking forward to at all since I wasn’t the biggest fan of the previous film in the series.

I was pleasantly surprised by the way that Elizabeth Banks restructures the story and adds a few very nice layers to the story line.

This film is the most engaging and entertaining of the trio of films based on the hit TV show from the 70’s.

The three young angels are meant to help make the story more appealing to a younger audience, yet none of them feel developed enough to care more about what happens to them whch is quite problematic.

The supporting cast is quite good and they help make the story seem more palatable.

The fact that they were able to get Patrick Stewart and Djimon Hounsou to play parts as Bosely’s (yes the explain the multiple ones quite well here) says so much about the way that the script is structured here.

The film has some great twists and turns along the way that help keep things quite ambiguous and mysterious the whole time.

The action scenes are also done well and that helps a lot in keeping things enjoyable.

MovieRob’s Favorite Trivia – The movie features extensive use of guns and other explosive weaponry. This is a marked change from its two cinematic predecessors, in which star and executive producer Drew Barrymore insisted that the Angels use no guns at all and almost no weapons aside from their own martial arts skills. (From IMDB)