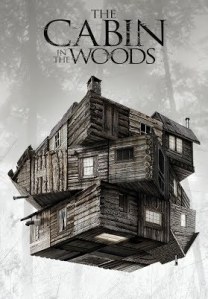 “[after discovering a hidden camera] Oh, my God. I’m on a reality TV show. My parents are gonna think I’m such a burnout. ” – Marty

Brief Synopsis – A group of friends go to a cabin for the weekend and encounter something they never expected.

My Take on it – As many of you who know me are aware, I am not a fan of horror movies at all and do my bets to avoid them at all costs

I knew that this movie was written by Joss Whedon and that fact intrigued me because I knew that it wouldn’t be a typical slasher film.

It’s therefore been on a watch list for a while and following a conversation earlier this week with my friend Mark Hofmeyer of Movies Films and Flix and Deep Blue Sea – The Podcast, I decided to give it a try.

The first scene of this film really threw me off and I thought that I was possibly watching the wrong film. [see Trivia section below].

Once the story began to get moving, I realized that despite it seemingly following the normal trope of a teenage slasher film, something was off that helped make things so much more  enjoyable.

The cats is superb with Chris Hemsworth leading the teens trying to stay safe.

In addition, Bradley Whitford, Richard Jenkins and Sigourney Weaver add so much to the way this story plays out.

The film was slightly more gorier than I like, but that was expected by the genre that this film fits into.

The film actually has some great twists an turns along the way that help make it more powerful and entertaining to watch because of the way that it is constantly changing directions.

The story has a high level of thrills and suspense throughout which keeps the viewer on the edge of their seat throughout.

MovieRob’s Favorite Trivia – The movie’s opening was a deliberate attempt by filmmakers Drew Goddard and Joss Whedon to confuse the audience and make them think they walked in to see the wrong movie. (From IMDB)