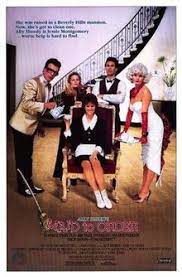 Brief Synopsis – A socialite who uses her money to boss people around is turned into a maid by a fairy godmother and must find a way to live the life of a poor person.

My Take on it – Horrendously bad film that doesn’t work at all.

The story makes very little sense and the phantasmagorical way that the story plays out fails to work well enough and instead of being insightful, it doesn’t make any sense at all.

The way that the film isn’t quite sure what genre they want to be is also problematic since the mix of comedy, drama and fantasy just doesn’t mesh well enough.

And the Fantasy aspects just doesn’t feel plausible even within the constraints of the story.

Ally Sheedy is a much better actress than her character portrays her as.

The supporting cast is also quite talented, yet the story doesn’t allow for any of them to truly break out.

Tom Skerritt, Beverly D’Angelo and Michael Ontkean have good roles, but they are all far too shallow for their own good.

MovieRob’s Favorite Trivia – Ally Sheedy had high hopes for this film, but knew she was in trouble after a pre-release screening at the Director’s Guild in Los Angeles left the audience disenchanted. Sheedy took her mother to the event, who told Ally mid-movie, “You’re better than the script.” (From IMDB)