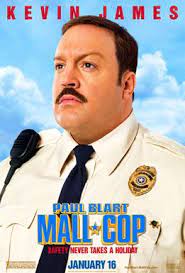 “Scuba-dooby-doo! [sends a scuba tank into a villain knocking him out]” – Paul Blart

Brief Synopsis – A mall security guard who takes his work very seriously must try and foil a group of thieves from trying to commit the perfect crime in the mall.

My Take on it – Extremely silly film that doesn’t work on any level.

Kevin James is hilarious in this film despite the fact that nothing he says or does here makes much sense.

His slapstick humor helps make things a bit more enjoyable to watch especially when he needs to do physical comedy.

Te villains of the film are completely undeveloped and that makes it even harder to take their actions seriously.

The story tries to hard to put this character in heroic situation where he should shine, yet continues to fail each time.

The main part of this film is based on the fact that one believes that James would have the proper training and abilities to stop his foes and that just isn’t done in a more convinving way.

Jayma Mays plays his potential love interest, but they have terrible chemistry together and it doesn’t seem plausible at all when trying to get them together.

The film’s antics can be slightly fun, but it all still feels a bit too much because they far too often decide to take things over the top and to the extreme which is completely unnecessary.

MovieRob’s Favorite Trivia – The first movie ever released in January to gross over $100 million during its initial release. (From IMDB)