This month’s genre has been chosen by Joe of The MN Movie Man and we will be reviewing our favorite Summer Camp Movies. 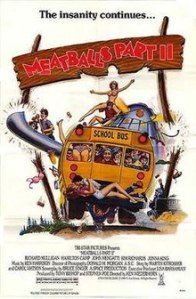 “Albert, when you were born were your parents expecting children? ” – Jamie

Brief Synopsis – Campers return for another fun summer at camp.

My Take on it – Second entry into the series that tries far too hard to be a cross between the original film in the franchise, a take off on alien films from the 80’s and also join in with the raunchy teen comedies of that era and fails on all accounts.

The story itself makes no sense what so ever and they have far too many characters with sub plot to give the viewer anything really coherent.

The characters are presented in an over the top fashion and even the ever fun Richard Mulligan fails to add to the enjoyment of this film.

The choice to add an alien to the group of campers a’la E.T. is really silly and just adds to the stupidity of the whole film which isn’t able to stay fun at all.

MovieRob’s Favorite Trivia – Cheryl (‘Richards, Kim’) is asked if she comes from another planet (due to her lack of experience with boys). Cheryl replies that she sort of is. Richards played a young alien girl, marooned on earth, in two Disney movies: Escape to Witch Mountain (1975), and Return from Witch Mountain (1978). (From IMDB)

Genre Grandeur Worthy? – Far from having a real chance.