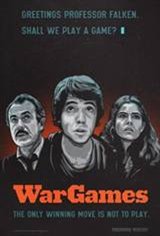 “What he did was great! He designed his computer so that it could learn from its own mistakes. So, they’d be better the next time they played. The system actually learned how to learn. It could teach itself! ” – David Lightman

My Take on it – Great Cold War thriller that uses so many computer and technological aspects that were so ahead of their time.

The story itself plays out quite well and is even more realistic when one watches it now than when one first saw it in 1983.

The film’s plot revolves around interactions with a computer network and at the time that this was made, very few people knew the power and effect of personal computers.

To modern viewers this is an every day occurrence and is so insightful when looking how they portrayed it all over 38 years old.

Matthew Broderick and Ally Sheedy are both superb in the lead roles as the two teens who quickly get over their heads when interacting with this military computer.

Obviously, certain aspects of the film are a bit far fetched, but it still remains so much fun to watch because of the way things play out.

MovieRob’s Favorite Trivia – The movie includes the first cinematic reference to a “firewall,” a security measure used in computer networking and Internet security. (From IMDB)