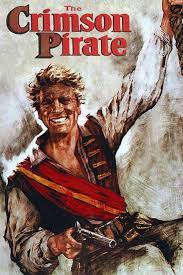 Tnx for letting me partake Paul!

Brief Synopsis – A pirate captain is hired by the government to help stop a rebellion on a small Caribbean Island.

My Take on it – Fun pirate adventure film that unfortunately doesn’t have enough of a backbone to make it even more enjoyable.

Burt Lancaster does a fine job in the title role and helps keep both the story and the characters very colorful along the way.

The plot is filled with lots of adventure, romance and piracy but there is something missing along the way that would help keep it feeling more important or compelling along the way.

The pirates are all portrayed in the typical way that one might expect, yet the way that their personalities come across along the way also adds to the way things play out.

The story does a nice job showing how pirate loyalties may sway as the things become clearer and that help ingrain the ideas of ‘money talks’ in these kind of situations.

MovieRob’s Favorite Trivia – Co-Producers Burt Lancaster and Harold Hecht were not fans of the witch hunts then taking place of Communists in Hollywood, led by the House Un-American Activities Committee. This movie was a sly slap at those activities, starting with the title, “The Crimson Pirate”, during the “red scare” of the fifties, and continuing with the plotline, of a government denying the rights of the people. They got away with it, as almost nobody noticed the political content of a pirate comedy-adventure movie. (From IMDB)

One thought on “The Swashbucklathon – The Crimson Pirate (1952)”