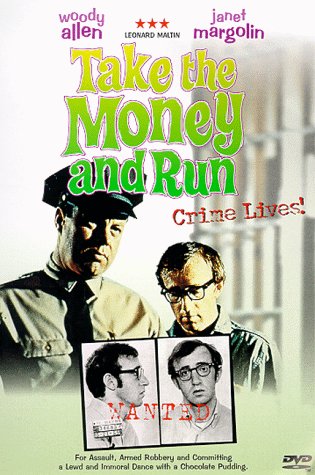 “He’d have the gang over for a meeting and I’d put out a little tray of pretzels and bullets… I had to. He’s my husband. ” – Louise

Brief Synopsis – Mockumentary about the life of a failed criminal, who can;t seem to get anything right.

My Take on it – This is one pf Woody Allen’s first films and he shows here the kind of talent that he has.

The film is a mockumentary of a criminal who has a lot of bad luck in his career.

The story brings interviews with the family and friends of his character and the fact that they are all compete fake makes it even more humorous to watch.

Unfortunately, the film feels repetitive in that aspect because of the way that these interviews go.

They do a nice job of trying to show his rehabilitation due to the fact that he falls in love with Janet Margolin.

The social commentary on this film is great because Allen is already able to show at this early stage in his career that he can have a character rob a bank and then have all the bank executive debate over what is actually written on the “Hold-up” card and whether it is written in a grammatically sound way.

The story doesn’t seem to have aged well enough and despite being less than 90 minutes, the film is far too long for its own good.