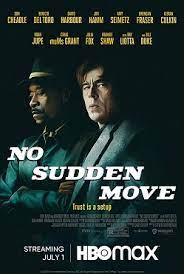 Brief Synopsis – Two criminals are hired to take care of a small job, but when things go south, they end up in a very big mess.

My Take on it – This is a film that I had so much hope for when I saw the cast list.

This film is such a mess and they just aren’t able to find a way to present it in a more palatable way.

The characters aren’t developed at all and there is no clear idea as to who the audience is suppose to root for.

The actions of these characters border on the line with idiocy that it’s even harder to believe that these are meant to be experienced and seasoned criminals.

The plot meanders along too much and they keep setting things up as if there will be a big surprise and then it just falls flat along the way.

The feel of the film is completely off kilter and that also hurts things far too much.

The fact that the film deals with secret automobile plans is shown in a very strange and confusing way and they make things much more complicated than is necessary.

MovieRob’s Favorite Trivia – Sebastian Stan, John Cena, Nicolas Cage and George Clooney were originally cast but were forced to drop out due to scheduling conflicts after the movie’s shoot was delayed from spring 2020 to autumn 2020 due to the COVID-19 pandemic. (From IMDB)