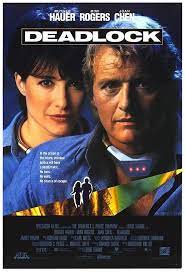 “[to Frank] You non-conformists are all alike.” – Warden Holliday

Brief Synopsis – A captured jewel thief is sent to a new kind of prison where the prisoners are electronically bonded in order to make it impossible to escape.

My Take on it – This is a film that I remember seeing when it first debuted on HBO back in ’91.

The concept is quite clever and works really well.

Rutger Hauer does a great job in the lead role despite his weird decisions about his hair along the way.

He is helped along by the supporting cast featuring Stephen Tobolowsky, Joan Chen, Mimi Rogers, James Remar and Glenn Plummer.

The story plays out in a nice way and the various twists and turns withing the plot help make things more engaging despite the fact that some of these twists can be seen a mile away.

The way that they show a futuristic society that takes place in the near future works even better now than it did when this was made 30 years ago because technology has advanced in some great ways over that time and this story becomes even more plausible.

MovieRob’s Favorite Trivia – The concept of convicts wearing explosive collars around their necks, which will explode if they get one hundred yards outside the prison, or separate from their “Wedlock” partner, was recycled from The Running Man (1987), in which Ben Richards (Arnold Schwarzenegger) and other convicts wore explosive collars around their necks, which would explode if they tried to escape, and if the perimeter was not deactivated. (From IMDB)