This is part of the Legends of Western Cinema Week Blog Celebration being hosted by Hamlette of Hamlette’s Soliloquy, Heidi of Along the Brandywine, and Olivia of Meanwhile, in Rivendell

Tnx for letting me partake Ladies, this was sooo much fun! 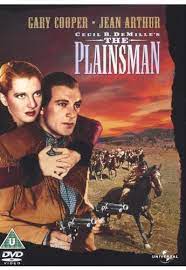 “Keep your hands off your guns or there will be more dead men here than this town can afford to bury! “- Wild Bill Hickok

Brief Synopsis – Wild Bill Hickok and Buffalo Bill join forces in order to try and stop an Indian uprising that wishes to utilize rifles sold to them by the government.

My Take on it – Great depiction of the stories of Wild Bill Hickok, Buffalo Bill and Calamity Jane.

The film is able to tell such a powerful story about some larger than life personas.

Gary Cooper, Jean Arthur and James Ellison are great as the trio of heroes.

Charles Bickford is great as the villain here who despite not being a match for any of the heroes, still manages to do a lot of damage along the way.

It was quite funny seeing Anthony Quinn in a small role as an Indian who enters the camp of the heroes by accident.

The story is told quite well and despite feeling truncated a bit from the true history, they still do a fair job giving a thrilling historical account of what truly happened.

MovieRob’s Favorite Trivia – On December 16, 1944 (the first day of the Ardennes Offensive) a V2 rocket was fired at 15:17 from the Dutch town of Hellendoorn. Five minutes later, the rocket landed in Antwerp, Belgium on the roof of the Cina Rex cinema during a showing of The Plainsman. At that time an estimated one thousand people were present in the cinema. The blast killed 567 people, including 296 Allied soldiers (mainly British). The bodies were collected in the great hall of the Antwerp Zoo, where family members could identify the victims. The military dead were usually buried in the Schoonselhof. Of the 281 victims whose names can be found, the average age was 26 years. There were certainly 64 women and 74 minor fatalities. Officially, there were 291 injured, but many minor injuries never reported. Eleven buildings were totally destroyed. It took almost a week to get all the bodies out of the rubble. It is about the deadliest single bomb strike during the Second World War. This incident would later serve as the inspiration for a major sequence in Thomas Pynchon’s novel “Gravity’s Rainbow.” (From IMDB)