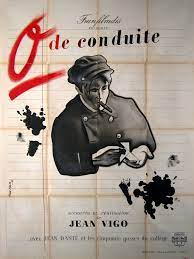 “War is declared! Down with monitors and punishment! Long live rebellion! Liberty or death! Hoist our flag on the school roof! Stand firm with us tomorrow! We’ll bombard them with rotten old books, dirty tin cans, smelly boots and all the ammo piled up in the attic! We’ll fight those old goats on commemoration day! Onward! ” – Tabard

Brief Synopsis – Young boys in a boarding school try and find new and innovative ways to rebel against their teachers and the system.

My Take on it – Interesting film that doesn’t have much of a plot besides the chaos that the characters cause along the way.

The young boys in this school do as much damage as they can to both property and person and it is clearly a story ahead of its time.\The various antics that they pull are fun to watch even if it is possible to think of them all as singular skits along the way to telling the whole of the story.

this film was quite controversial when it came out due to what it had to say about the “system”, but when viewing it from a perspective of nearly 90 years later, it seems much tamer than it was meant to be at and be seen at the time.