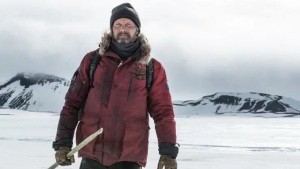 When James Wan released Insidious, he reinvigorated a very tired horror genre. Going back to basics to get maximum return, something you could do to any genre. Joe Penna‘s Arctic follows those rules in the Survival thriller genre. They do it in the most minimal, effective , sophisticated way.

Mads Mikkelsen stars as our stranded hero, Overgard. A pilot whose plane crashes in an remote part of the arctic. When we first meet him, he’s chipping away at the snow, for the camera to reveal his ‘S.O.S’. Apart from little clues in and around his plane we don’t even really know who he is nor do we see the crash. What we do learn he’s a pilot of a cargo plane and a survivor who utilises what he’s got. Using his plane as refuge, he hunts for fish he stores in a cooler. He spends his days  exploring, note taking and watching out for any potential rescues. Before cocooning himself in his self-made sleeping bag until his alarm  awakens him its time to do it all again.

With Frost Bite lurking, Overgard is determined to escape his Prometheus lifestyle. Suddenly a potential way out gives him hope , but things take a dramatic twist forcing Overgard to change his plans. With his newly arrived survivor he must either leave the safety of his camp or trek into the unknown.

On paper Arctic sounds like another generic thriller that’s been made a million times before. Keeping things simplistic not burdening Overgard with a back story makes you focus on his well being.There’s no flashbacks, voice overs or even a 127 Hours style hallucinations. Also Penna keeps away from those overly cliched Hollywood blockbuster tropes too.

If you enjoy Robert Redford in J.C Chandor‘s  2013 film All Is Lost, you’re going to enjoy this one. Apart from sharing a similar tale of survival, both Redford and Mikkelsen lines are minimal if not non-existent. Arctic is an testament to Mads Mikkelsen‘s acting ability. His able to genuinely convince in him. You feel his frustrations at his wrong moves, his pain when he falls and his desperation when he gets close.

It’s amazing to believe Arctic is Joe Penna’s directorial feature debut.Before this, he was a Youtube star who built up experience through short films and television.

Thanks to Tomas Orn Tomasson‘s cinematography capturing Iceland’s merciless landscape as the unforgiving panorama. Throw in Joseph Trapenese’s (The Raid, The Greatest Showman) evocative score and Mads Mikkelsen’s intense eloquent performance, you don’t have to be bursting with A-listers to deliver.

Arctic is an reminder that in the face of doom, humanity’s resilience, optimism and empathy can conquer anything life throws at us.