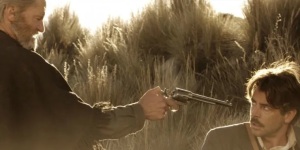 When it comes to Westerns they don’t go hand in hand with me, it’s like having Charlton Heston the chairman of the anti-gun lobby. I never really jumped on board the recent trend of making Westerns (or remaking as they like to do these days) despite living in a household which Cowboy novels and films were common entertainment. The question is could I ever embrace Westerns maybe  Mateo Gil may have the answer, what if Butch Cassidy didn’t die in the shootout with The Bolivian Army? Starring Sam Sheppard Blackthorn  may well  provide that alternate reality.

It’s been said (but unsubstantiated) that Butch Cassidy and The Sundance Kid died in a shootout with the Bolivian Army in the first decade of 20th Century (1908). What If Cassidy (Sam Sheppard) survived? In Blackthorn he does, living quietly in the secluded mountains of Bolivia under the name of James Blackthorn. living the majority of his life in exile Blackthorn becomes tired of the long isolation he desires to return home to America to see his family one more time before he meets his maker. Now decided to make the long journey home he has an unexpected encounter with a young ambitious Eduardo (Eduardo Noriega) derailing his plans thrusting him into one last adventure like how he used to do in the good old days with the Sundance Kid.

Blackthorn isn’t a Western the traditional sort of the way playing in an alternate reality which opens the story up to unlimited possibilities making the film more appealing. This isn’t Cowboys& Indians in non-stop shootouts, but relying on a more character driven storyline that’s pensive as well full of atmosphere. Blackthorn is essentially more arthouse than John Wayne generic style, however, the grit and bullets still fire aplenty in a full blaze of glory with the odd cliché to remind us this is Western but not enough to call it stereotypical. The dialogue is minimal but effective which gives you the sense that Cassidy has been doing a lot of reflection about his past demeanours, now it’s time to face the music. Cassidy knows his time on earth is nearly over but the introduction of Eduardo the temptation to rekindle his dangerous younger days is too tempting.

Cassidy and Eduardo have a great on screen chemistry. Like the saying can’t teach an old dog new tricks is true however you can never deceive an old dog with old tricks so when Eduardo enters Cassidy’s domain he is treated with caution but the old timer reads him like a book and knows he’s not getting the story. The pair provide us with some fantastic dialogue but so does McKinley (Stephen Rea) Cassidy’s old sheriff nemesis. We first meet Mckinley in a number of flashbacks which show off Cassidy in his younger days (played  by Game of Thrones/Headhunters Nicolas Coster-Waldau who provides a decent account of young Cassidy), which at times were a little distracting but giving us a insight of what life was like and a reason why Cassidy is now returning home. When we first meet McKinley he’s a determined man of the law but when he comes face to face with his grizzled face old foe he is a shell of his former self, a washed out man haunted by his failure to capture Cassidy.

What really sets this film apart from others is the stunning scenery of the Bolivian vistas and surrounding areas which is simply beautiful. The Uyuni Salt Flats really capture the awe inspiring geography of the country as well as highlight that the scenery is also deadly to those not accustomed to it, we also get a really exciting chase in the flats that also provide some of the films uncomfortable moments too.

Blackthorn is a superbly scripted film which has a conscience depicting the lives of the impoverished Quecha population but never feeling patronising. At times the film the film delves into a melancholic ride into George Roy Hills Butch Cassidy And The Sundance Kid territory but never enough to consider this film a sequel. I’ve always appreciated Sam Sheppard as an actor and in Blackthorn Sheppard proves his worth as the lead with a polished performance even Paul Newman would be proud of. The film is a slow burning compelling film with Western fans should appreciate, it maybe a low key affair but it proves you don’t have to spend big or even have a big named cast to be successful but most of all entertaining. So Rooster Cogburn its time to make room  as another old boy in town his name is Butch Cassidy!