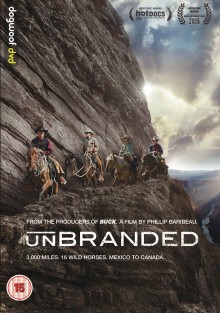 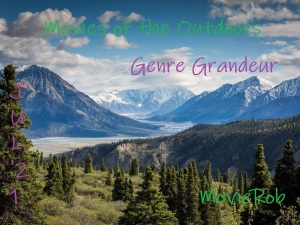 For this month’s next review for Genre Grandeur – Movies of the Outdoors here’s a review of Unbranded (2015) by David of BluePrint: Review 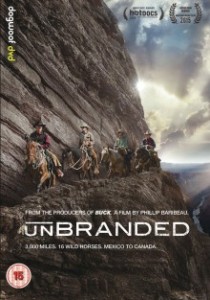 As regular readers (if I have any) will know, I’ve been developing a great love of Westerns over the last few years. I’m interested in everything cowboy related at the moment and being a big documentary fan too I was chomping at the bit (pun intended) when I heard Dogwoof were releasing Unbranded, a film that looked to combine those interests.

OK, so it isn’t about cowboys as such and doesn’t examine the traditional ‘Wild West’ period, but Phillip Baribeau’s documentary certainly has the spirit of the American frontier embedded in its soul.

Unbranded charts the expedition of four young men (led by Ben Masters) who set out to prove the worth of American wild horses (a.k.a. mustangs) by taking thirteen of them on a long and treacherous journey from Mexico to Canada. Covering a whopping 3,000 miles, their path takes them over rugged and perilous terrain, testing the abilities of and relationships between the men and their animals.

The film also looks at the issues caused by the mustang population in the US. The free-roaming horses and burros of the United States are managed and protected by the government, but, partly because of their protection, their numbers are growing rapidly and they are damaging the environment around them. This has caused a passionate debate from different sides of the argument as to what should be done. The film presents these in amongst the trials and tribulations of Masters and his team.

Unbranded grabbed my attention in the first couple of minutes with a shocking opening shot where one member of the team gets kicked in the face by a horse and the camera spins around to catch another one bucking wildly with a rider on its back. Following this up with some glorious shots of the animals in the wilderness and some stunning slow motion sequences, I was convinced very quickly that I would love this film.

And yes, I did like Unbranded quite a bit, but my enthusiasm did wane a little as it went on. Maybe that opening raised my expectations too high, but there were a couple of elements to the film’s construction that bothered me enough to knock the final score down to what stands here. First and foremost are the talking heads. I don’t mind a documentary using the technique at all, but this seemed to suffer from an approach many (generally American) docs adopt, where soundbytes over-exaggerate and force the drama. Scenes such as a nail biting clamber up a rocky cliff-face are gripping enough as they are – we don’t need to hear those involved boasting about it. To be fair, most of the problem seems to come solely from one contributor, Ben Masters. The other men on the trail usually play down incidents along the journey or are self-deprecating, but Masters seems to amp up the drama for the cameras, shoehorning in cheesy quotes and coming across as (to put it crudely) a bit of a dick. I had the same problem with Man on Wire though and everyone seemed to love that, so maybe it’s just me.

Another smaller niggle I had with the film was with the elements delving into the politics of controlling the mustang population. These elements didn’t always gel with the adventure the film was fuelled by, so it felt like two documentaries stuck together at times. The film felt a little biased towards the operations of the Bureau of Land Management (BLM) too. It doesn’t criticise the other sides of the argument so to speak, but I didn’t feel it gave them much of a voice either.

As I said a couple of paragraphs back, I did like Unbranded quite a bit though, so I should stop bashing it before I round up my review. I think my initial excitement just made the slight issues I had more annoying. The most clearly impressive aspect of the film are the visuals. The film looks gorgeous, making the most of the beautiful landscape the group travel through. The slow motion shots mentioned earlier are a great addition too, and GoPro’s are used very effectively in the more hair-raising moments. It’s one of the most well shot documentaries of recent years, which is impressive given the situations the crew must have found themselves in. The setting and light obviously helped, but the team did a top notch job nonetheless.

In general, what grabbed me about the film though was its sense of adventure. Watching Masters and his team trek through the magnificent American landscape made me desperate to saddle up and join them, even though I’d be totally useless out there. The most horse-riding I’ve done was a pony trek in Wales when I was 12. The mix of hard graft and goofy antics makes the expedition seem gruelling but fun. There’s a great sense of humour amongst the group and within the film as the boys mess around and wind each other up. There are some fallouts between them here and there (which felt a little forced at times), but for the most part there’s a strong sense of camaraderie.

So, as much as some of the soundbytes bugged me with their over-exaggerated drama and as disjointed as I found the film’s political angle, the film still won me over in the end. It’s a beautiful journey and a pleasure to watch. It made me want to join the boys out in the open range and live out my dreams of being a cowboy even though I’m an internet addict who’s afraid of spiders and wouldn’t know where to begin in looking after a bunch of wild horses. I think that proves a job well done by the filmmakers.