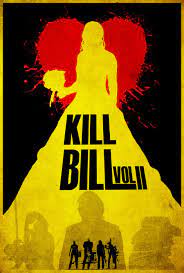 “”In Africa, the saying goes ‘In the bush, an elephant can kill you, a leopard can kill you, and a black mamba can kill you. But only with the mamba is death sure.’ Hence its handle, ‘Death Incarnate.'” Pretty cool, huh? ” – Elle Driver

Brief Synopsis – The Bride continues on her quest to enact revenge on those who tried to kill her.

My Take on it – This film is essentially not a sequel but actually a continuation of the story told in Vol I.

Uma Thurman is once again superb as The Bride and does a wonderful job making the viewer care so much about her quest for revenge.

The Quentin Tarantino dialogue is perfectly suited for a film like this one and gives these characters so much more life in the way that they are presented and fleshed out.

The action scenes are also done really well, but they lack the large scale choreography needed in the previous ‘chapter’.

This part of the story is a bit slower and laxer than the previous one and it feels as if the story loses part of its momentum along the way.

The music is also great and adds even more life to the way it all plays out.

MovieRob’s Favorite Trivia – The brothel segment where the Bride meets with Esteban Vallejo (Michael Parks) was the last scene of the movie to be shot. It was filmed at a Mexican brothel and all of the female extras were prostitutes that worked there. (From IMDB)