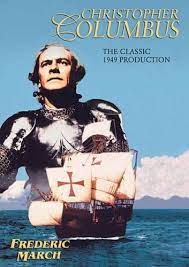 Tnx Tiffany and Rebekah for letting me take part!

“[as he and Diego observe a native smoking tobacco] Doesn’t that prove how backward they are? You never see a civilized man do that.” – Christopher Columbus

Brief Synopsis – Biopic of how an idealistic man was able to convince the rulers of Spain to send him on a costly expedition to find a new route to the Far East.

My Take on it – This was a film that I had never heard of before doing research for this blogathon and was quite surprised to see that Fredric March played such an iconic character in history.

The production and story of this film is told in a very tedious way and it seems as if it is being rushed through the whole time.

The characters aren’t developed well enough and that hurts things too much along the way.

The scenes are the sea are the most powerful of the entire movie because they are able to show the fear and trepidation of the crew as things begin to feel too desperate.

The fact that this film is only slightly longer than 90 minutes also works to its disadvantage since this is the kind of story and character that needs to be fleshed out even more than they manage to do here with the way it all plays out.

There are also some aspects of the story left far too ambiguous and unanswered which makes one want so much more.

The best part of this film is the fact that March is in the lead because his performance adds even more gravitas to things even if he isn’t able to do even more to help make things more enjoyable.

MovieRob’s Favorite Trivia – Fredric March was very disappointed with the final film and actively sought to have its distribution limited. (From IMDB)