For this month’s next review for Genre Grandeur – Movies that take place over a 24 Hour Time Frame (Not including time loop movies). here’s a review of Dunkirk (2017) by Aaron Neuwirth of the Code is Zeek

Thanks again to Jess Manzo of French Toast Sunday for choosing this month’s genre.

Next month’s genre has been chosen by  Michaela of Love Letters to Hollywood and we will be reviewing our favorite 60’s Comedies.

Please get me your submissions by the 25th of Sep by sending them to 60smichaela@movierob.net

Try to think out of the box! Great choice Michaela!

In the time since seeing Dunkirk, writer/director Christopher Nolan’s tense World War II survival story, I’ve thought a lot about how essential the use of structure and time was to the film. Nolan played around with narrative structure in his early films such as Memento and Batman Begins. He used time as a primary narrative conceit in his previous film, Interstellar. Time is a theme that’s less talked about for the acclaimed filmmaker, compared to other noted elements in his films. For Dunkirk, time plays a critical role, as Hans Zimmer’s score literally functions as a ticking clock. Keeping structure in mind, it’s amazing how these two particular components combine to deliver such a precise film that deserves to be viewed on the biggest screen possible. 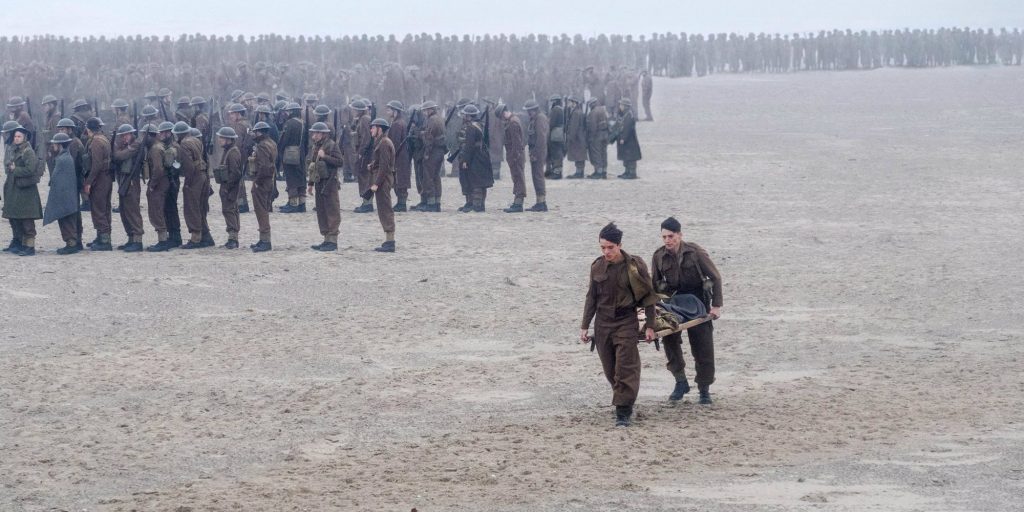 Having done the work to move from smaller films to bigger and bigger productions, Nolan has become one of the last director’s that can sell a movie on his name alone. He’s combined big ideas with big-budget filmmaking in a way that suggests audiences are in for an event. Dunkirk is such an event, as it takes a fresh look at WWII films by eliminating many of the elements we usually find in war movies. Rather than delve into the politics of the time or provide consideration for those on the other side, this is a film that has Nolan placing the viewer right in with the action from the side he represents and cares about.

Set in 1940 on the beaches of Dunkirk and the English Channel, at this point in the war, the German Army has the Allied soldiers surrounded. This means a massive evacuation is needed if there’s going to be any chance for a future victory. We are being shown three perspectives throughout the film. One is from the viewpoint of a young soldier (Fionn Whitehead), who spends a week trying to get off the beach and back to England. Another finds Mark Rylance as a civilian mariner steering his boat towards Dunkirk to help with the evacuation over the course of one day. The final sequence finds Tom Hardy as an RAF pilot doing his best to stave off axis aircraft from bombing the beaches and ships during one hour.

I found this structure to be fascinating. Nolan may bow to convention regarding character arcs, but he has an original voice, which is once again found here. It may only help that the film lacks reams of dialogue, meaningful monologues, and soliloquies about dead wives that have cropped up in his past films. Dunkirk strips it all down from a traditional narrative standpoint, as the film is so intent on delivering a visceral visual experience that most of the character-driven emotion comes from shared glances and occasional pondering seen in Hardy’s furrowed brows. 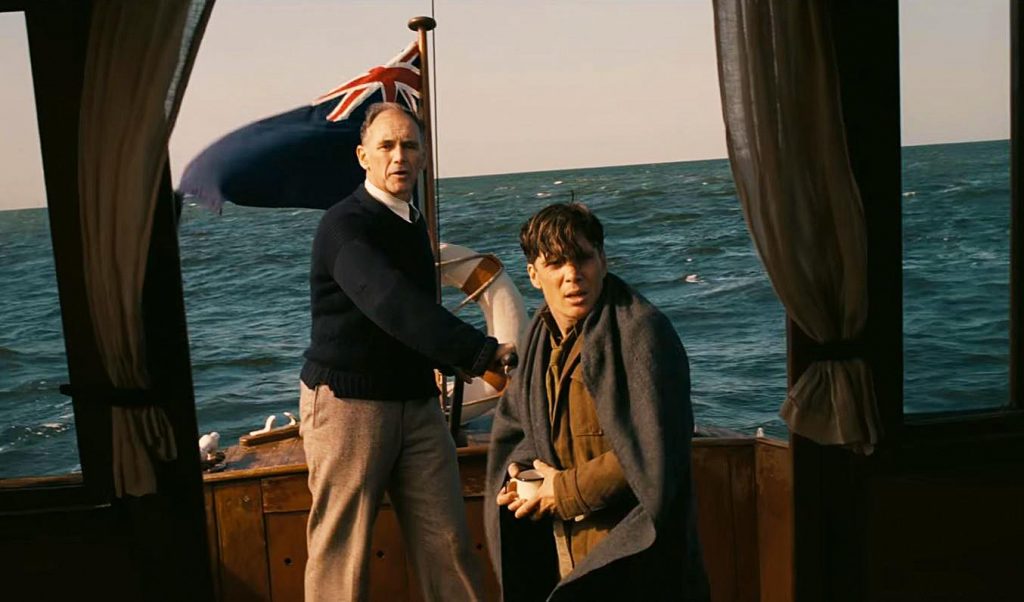 By dividing the film up into three sections, Nolan once again finds an excellent way to pull off a narrative trick resulting in audience satisfaction. Much like how Memento trains you how to watch it as it moves along, Dunkirk finds editor Lee Smith doing the work to crosscut between scenes and build a sense of place for each set of characters. As a result, if you were to draw out the timeline of this film, it would create a spiral of three lines that all eventually converge. Watching that take place in a theater, it’s nothing but satisfying to see these stories culminate in such beautiful cinema.

Once again, Nolan has utilized IMAX cameras to shoot much of this film (around 75%). I loathe the idea that Dunkirk will eventually be seen by people on tablets and phones, eschewing all that went into this production and making a case for why the theatrical experience is not only great but essential in many cases. A real showman, Nolan pulls out the stops to create a powerful visual experience indebted to cinematography by Hoyte van Hoytema. Having such a massive canvas to work with, it’s impressive to see so much come from not only the brilliantly staged (and impressively simple) aerial combat scenes but the close-ups that focus on the journeys of characters such as Rylance and Cillian Murphy as a shell-shocked soldier plucked out of the sea.

Seeing all of this would be nothing without a component production team that works at every level, and Dunkirk also manages to deliver in spades. The sound design matches up to the incredibly tense score by Zimmer, perfectly echoing the desperateness of the situation. Visual effects do exactly the job that is needed to convince audiences that hundreds of thousands of men on are this beach, waiting to be off it. Stunt teams, production designers and everyone in between have come together in building a very specific time that is given almost no context beyond some opening passages and a few lines from Kenneth Branagh’s Commander Bolton.

That’s the other great thing here. The way in which Nolan compresses Dunkirk into a tight 107-minute film (with credits) means we are watching one big action sequence that never feels empty, flat or less than impressive. One can argue it’s a bit repetitive at points, but the film is still placing us in the moment with soldiers who were repeatedly suffering various stages of defeat. This is not a movie about a triumphant scenario, though there are certain things and people to praise when it comes to Operation Dynamo (Winston Churchill’s name for the evacuation). Dunkirk is based around the time when a retreat was the best option. The film takes that concept and builds a story of endurance out of it.

Fortunately for Nolan, he’s armed with a great team of filmmakers and performers who all bring what’s needed to a film with no singular heroic focus (though Whitehead, Rylance, and Hardy all commit selfless deeds). Nolan’s also here to throw down a gauntlet when it comes to showing why theatrical cinema is so valuable. I’ve mentioned how the film’s structure is a spiral and while those twists and turns lead to many tense and exciting moments, it’s those endpoints that fulfill the promise of what Dunkirk’s big screen spectacle has to offer. A few shots in the film’s final minutes that perfectly execute the drive in making a film so focused on letting what’s seen on camera do the work. Dunkirk is not quite a miracle, but it’s one of the best reasons for going to the movies. 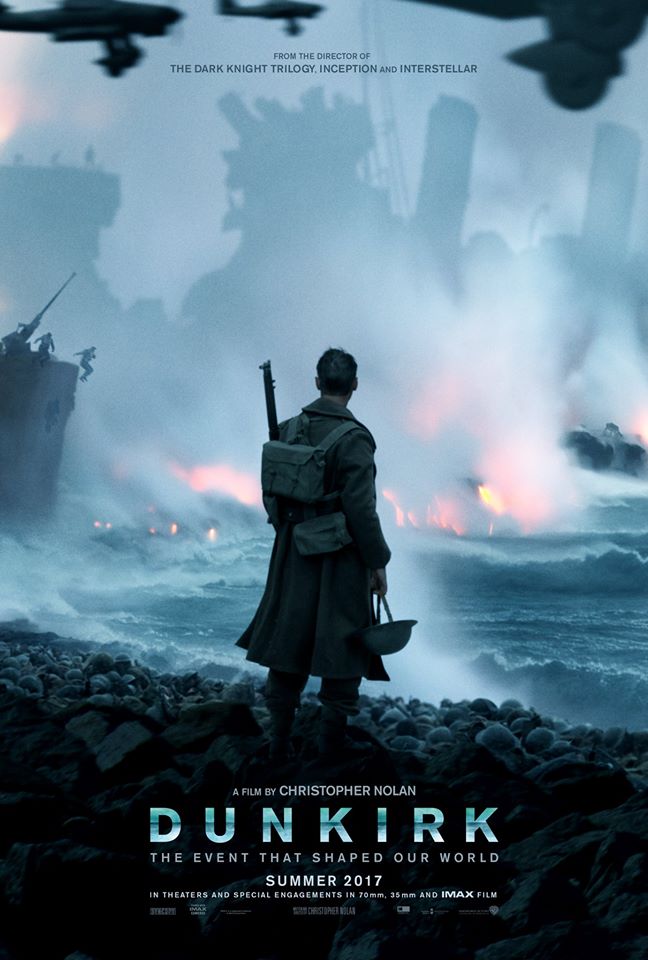