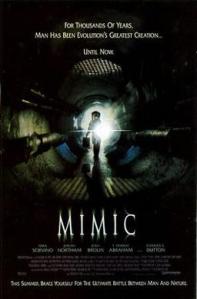 “This is what I love about my job. I get to travel, see the world, meet new cultures. I mean, it’s all bacterial, but, hey, what the f*ck?” – Josh

Brief Synopsis – After mutant insects are created to fight a disease killing children, the species gets out and eventually begins to hunt and kill humans.

My Take on it – Scary idea that could be based on fact due to the way that the science is explained. The special effects are too weak tho and that takes away some of the realism of the story itself. This is an early film of Guillermo del Toro who shows his adept level of storytelling even if he didn’t yet have the budget to make something much better looking. Mira Sorvino is a great actress, but she feels quite miscast for this role.

MovieRob’s Favorite Trivia – The character of Manny was originally written by Guillermo Del Toro for one of his favorite actors, Argentinian Federico Luppi, whom he directed in Cronos. However, Luppi’s English pronunciation was not good enough for the film, so del Toro chose Giancarlo Giannini instead; in a 2013 interview del Toro confirmed the story and stated that what he misses the most about working in Spanish language is the possibility of directing Luppi, for whom del Toro professes the utmost admiration. (From IMDB)