For this month’s next review for Genre Grandeur – Spy/Espionage Films here’s a review of Night Train to Munich (1940) by me!

Next month’s genre has been chosen by Marc of French Toast Sundays and we will be reviewing our favorite Live Action Disney Films.

Please get me your submissions by the 25th of Nov by sending them to disneylivemarc@movierob.net

Try to think out of the box! Great choice Marc! 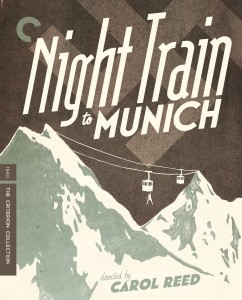 “Freedom in Germany is a great advance on freedom elsewhere. It’s properly organized and controlled by the state.” – Gus Bennett

Brief Synopsis – After escaping from a German concentration camp, a young woman tries to find a way to help get her scientist father across the lines before the Nazi capture him.

My Take on it – Excellent thriller that works so well despite some of naiveté of the plot (based on what was known in 1940 about The Nazi Atrocities).

The story plays out really well and the way that both sides of this conflict send spies into action with this important mission shows how integral scientific discoveries were then (and still are now).

The story plays out really well and they find some very intriguing ways to let this plot move along.

Rex Harrison is superb as the British agent tasked with finding a way to get a Czech scientist to safety.

Paul Henreid is the German spy trying to do the exact opposite.

Both of these men will do all they can to achieve their goals especially when they aren’t always aware of the real intentions of the other.

Love the way that both sides constantly need to improvise as things unfold.

This was actually the second appearance of the characters of Charters and Caldicott in a film and they would appear in a total of 6 together.

The climax of his film takes place on a cable car and adds a lot of suspense to the film especially given the way that it was filmed.

MovieRob’s Favorite Trivia – The first scene is a fairly accurate depiction of the Berghof, Adolf Hitler’s mountainside residence near Berchtesgaden and Obersalzberg in Bavaria. The house was famous for its huge picture window which overlooked mountain scenery and was often used to impress visiting foreign VIPs. (From IMDB)