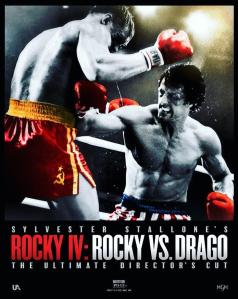 “[At the end of the Creed-Drago fight] What started out as a joke, has turned into a disaster.” – Commentator #1

Brief Synopsis – After tragedy strikes during an exhibition match, Rocky Balboa takes on the challenge of a Russian boxer.

My Take on it – This is a film that I have always enjoyed ever since seeing it in the theater when I was 11.

I have seen it countless times since then and still continue to enjoy the way that the story plays out.

When it was announced that Sylvester Stallone was going to put out a new Director’s Cut of the film 36 years after it was made, I was a bit skeptical because what could really be added to this film in order to make it better.

Now that I’ve seen it, I can honesty say, that he was actually able to find a way to make this story better, more mature and more powerful to watch.

This version uses 40 minutes of footage not in the original cut, yet also excises just about the same amount from that earlier version.

What we get here is a leaner, clear cut and more poignant story that resonates so much better than the theatrical version ever was able to do.

The story allows for more development into the psychological reasons of Apollo accepting Drago’s challenge and the cost that Rocky needed to pay in order to go into the ring with Drago on foreign soil.

The way that they cut little bits and pieces here and there make things even more enjoyable and helps make the story feel much more ‘grown-up’ than it allowed for beforehand.

Like many other Director Cuts of films that have enhanced their original film, this is another case where I no longer plan to ever watch the original version because this new updated and adapted version is so much better and that truly shows how Stallone himself has matured over the years with his choices on how to cut this film.

MovieRob’s Favorite Trivia – At the beginning of the press conference between Ivan and Rocky, a newspaper briefly flashes on screen with the headline “Rocky vs. Drago – for Guilt or Glory?”. The accompanying article is from an actual newspaper about the 1985 World Series between the St. Louis Cardinals and the Kansas City Royals. The first couple paragraphs indicate that it was following game 2 with the Cardinals leading the series 2-0. The Royals would go on to win the World Series 4-3. The article would have been published on October 21, 1985 (the day after game 2), just a little over a month prior to the films release on November 27, 1985. (From IMDB)