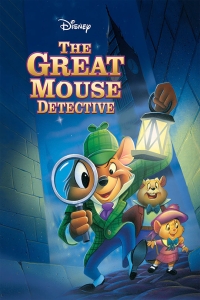 “There’s always a chance, Doctor, as long as one can think.” – Basil

Brief Synopsis – A mouse detective must try and solve a kidnapping of a toy inventor by his archenemy.

My Take on it – Very mediocre Disney film that really scrapes the barrel.

The plot is quite weak and none of the character feel as if they are developed enough to help make the story more enjoyable.

The plot is a bit too simplistic and fails to find it’s stride which makes this story move at a very slow pace.

The one thing I really liked about this film is the use of Vincent Price as one of the voice actors.

There is a reason this film unfortunately isn’t considered among the Disney Classics….

MovieRob’s Favorite Trivia – It was ultimately Vice President of Walt Disney Feature Animation Peter Schneider who made the decision to change the title of the film from “Basil of Baker Street” to its current title. On February 13, 1986, an inter-office memo was sent out to Disney employees in Schneider’s name announcing the renaming of the studio’s most beloved classics. Snow White and the Seven Dwarfs (1937) would be called “Seven Little Men Help A Girl”, Fantasia (1940) received the title “Color And Music”, The Jungle Book (1967) was getting its title changed to “A Boy, A Bear And A Big Black Cat” and so on in that fashion. Schneider was furious over the memo and attempted to find the author (animator Ed Gombert) so he could fire them. All the other employees found it a harmless joke and kept quiet. A copy of the memo eventually landed in the pages of the LA Times and all the “new” names were incorporated into the “What’s In A Name?” category on Jeopardy! (1984). Schneider eventually came to regard the memo as it was intended and in 2009 reminded Don Hahn about the clip during production of Hahn’s documentary Waking Sleeping Beauty (2009). (From IMDB)