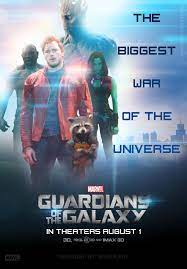 For this month’s next review for Genre Grandeur – Oscar Nominated/Winning Films. here’s a review of Guardians of the Galaxy (2014) by me.

Next month’s genre has been chosen by Tyler of The Geek Card Check and we will be reviewing our favorite Sports Themed Films.

Please get me your submissions by the 25th of Apr by sending them to Tylersport@movierob.net

“That’s for if things get really hardcore. Or if you wanna blow up moons.” – Rocket Racoon

“No one’s blowing up moons.” – Gamora

“You just wanna suck the joy out of everything.” – Rocket Racoon

Brief Synopsis – A group of misfits end up banding together to try and stop a warlord from obtaining a very unique stone with much power.

My Take on it – This is a film that I never expected to enjoy so much.

I even chose not to see it in the theater when it came out since I knew nothing about the characters since they were not part of Marvel that I was familiar with.

This is the one film in the MCU, that even after more than 7 years, I’m still disappointed that I didn’t get to see in the theater.

The film does an amazing job of developing these characters and making the audience like them so much in order for them to eventually begin to work together.

The story flows really well and being that this is the first foray of the MCU into space, they immediately took the MCU story to a whole new galactic level.

The way that the world they live in feels so lived in is great because it adds to the realistic feel of an expanded universe.

The cast is great and Chris Pratt as Star-Lord is one of my favorite MCU characters due to his fun personality no matter what situation he gets himself into.

The Soundtrack is superb and I can listen to these songs over and over because they are so catchy and enhance the action in this film.

The special effects are amazing and help make things both look and feel so much more real.

This film was nominated for Two Oscars – Best Special Effects and Best Makeup and hair-styling but lost both of them.

This is probably my favorite film in the MCU and I can’t wait to see where they take these characters.

MovieRob’s Favorite Trivia – When Dave Bautista found out he got the role of Drax the Destroyer, he broke down in tears, overjoyed at getting a Marvel comic book role. He prepared for the role with an acting coach. (From IMDB)