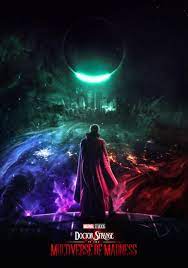 “I thought one Strange was bad enough. ” – Wong

Brief Synopsis – Dr. Strange must find a way to help a young girl who can travel through the multiverse as a mysterious creature is hunting her in order to take her powers.

My Take on it – I LOVE living in a country where new movies premier on Thursdays because it usually allows me to see movies before many other people in the world.

This is a film that I’ve been anticipating for quite some time since Dr. Strange is one of my favorite characters from the MCU.

The fact that this film’s title gives away the idea that the story deals with the multiverse was also a reason I wanted to see this so badly.

I grew up loving the stories from DC comics as opposed to Marvel and whenever they would deal with multiple universes and time travel, I was constantly hooked on those stories.

Once they touched upon the idea in Spider-Man: No Way Home (2021), I was excited to see where this film’s story would lead things.

The end result is great and they give a great overview of the multi-verse, while still keeping the story engaging and enjoyable throughout.

The film does rely a bit on some of the Marvel TV shows, but that was expected and this actually shows how they will continue to bind the stories of these two mediums together in order to create a much larger, more colorful and more comprehensive MCU.

The story does a great job of introducing new characters while developing the previously familiar ones at the same time.

The thing that I loved the most about this film is the fact that they ask the age old question in just about every time travel or multi dimensional storyline in sci-fi; Can one change their own lives for the better by using and utilizing these ideas or will it only construe more chaos along the way.

Sam Raimi is able to bring into this film his own personal ideas of how a pseudo-horror film could fit into the MCU and it doesn’t at all feel heavy handed especially when they have a few shock scenes that might have the viewer jump from their seat while also giving the story more gore than most previous MCU films have endured.

Can’t wait to see this again and I really look forward to where they will take this story in the future.

MovieRob’s Favorite Trivia – Director Sam Raimi previously added two references to the character Doctor Strange in Spider-Man 2 (2004): Joe’s Pizza (where Peter Parker is working at the beginning) and the billboard showing Mary Jane are located on Bleecker Street – the street where Doctor Strange’s Sanctum Santorum is located. The title of Doctor Strange was suggested to J. Jonah Jameson as a possible name for Dr. Octavius, to which Jameson replies “But it’s taken!” (From IMDB)