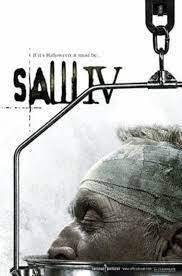 “Time is an illusion that cannot be given. ” – Jigsaw

Brief Synopsis – A cop is forced to play the games of Jigsaw in order to save the lives of two of his colleagues who have been kidnapped by the notorious killer.

My Take on it – Another well put together story in this series that continues the storyline and characters from the previous films.

Love the way that they are able to make connections between the seemingly disconnected characters and make it all seem very fluid the whole way through.

As with this kind of horror movie warrants, there is much gore throughout especially during a few key autopsy scenes.

Thankfully, I once again managed to avert my eyes during these scenes in order to spare myself from being too grossed out.

Really love the way that the riddles and games are set up here because it allows for the suspense to be raised each time since we never know who will make it through their test and who wont.

After knowing who the killer is during the past films, it’s great how they have decided to change things around and keep the audience guessing about the new person who has taken over the baton.

The way that the film utilizes a fun form of a scavenger hunt with clues to find the next location each time is done really well and enhances the story even more as it moves along.

MovieRob’s Favorite Trivia – The seamless transitions between separate scenes in the film were not created using digital effects, but were done practically. For these transitions, the sets were built in such a way that two separate scenes could be filmed in one shot without interruption. (From IMDB)