For this month’s first review for Genre Grandeur – Fantasy Movies of the 21st Century, here’s a review of The Boy and the Beast (2015) by David of BluePrint: Review 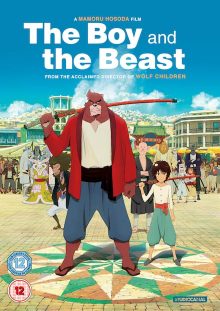 Mamoru Hosoda is a writer and director making a good name for himself in the anime world. After some TV work and a couple of films from TV franchises, he turned heads with The Girl Who Leapt Through Time and two of his subsequent films, Summer Wars and Wolf Children, which were all critical and commercial successes (in Japan at least). His latest film, The Boy and the Beast, is no different, attracting mainly positive reviews and becoming the second highest grossing release of 2015 in Japan. Being an anime fan and having enjoyed The Girl Who Leapt Through Time and Summer Wars quite a lot (I haven’t seen Wolf Children), it didn’t take much convincing for me to take up an offer of reviewing the film.

The Boy and the Beast sees a young boy, Ren (Aoi Miyazaki), become a runaway, living on the streets of Tokyo after his mother dies and his father (who had previously divorced his mother) doesn’t come forward to look after him. Whilst living rough, Ren bumps into Kumatetsu (Kôji Yakusho), a warrior beast who is looking for a pupil to train. Kumatetsu lives in a secret realm of the beasts, where he is in contention to become the new Lord, as the current Lord is due to leave this world and become a God. Kumatetsu is pig-headed and arrogant though, doing everything alone, and a worthy Lord must be a teacher with an heir as well as a mighty warrior. 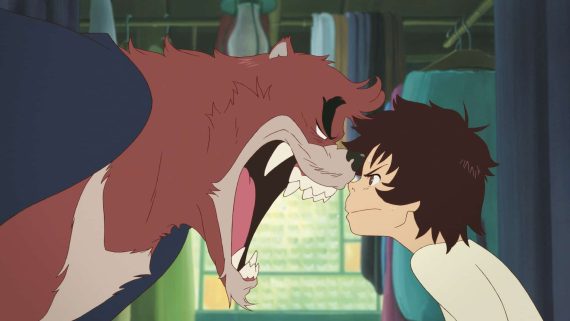 Seeing spirit in Ren, Kumatetsu decides to take him on as his apprentice, and Ren accepts after getting into one too many tussles with the police and witnessing the wonder of the beast world for himself. The boy’s name is changed by Kumatetsu to Kyuta (which means 9, the boy’s age) and the two set to work. Kyuta puts a lot of effort in for the most part, but doesn’t take well to Kumatetsu’s rough, shambolic teaching style. Over time however, the both of them learn from each other to become an excellent teacher and pupil pair. When the film moves forward a few years though, Kyuta stumbles into the human world again and discovers a desire to find his father and also himself, spurred on by a blossoming relationship with a young bookworm, Kaede (Suzu Hirose), who he saves from some bullies. Kyuta’s drifting away from the beast world throws a spanner in Kumatetsu’s plans to become Lord though, as do some further complications down the line.

Like The Girl Who Leapt Through Time and Summer Wars, The Boy and the Beast is an imaginative and lively film with a lot of heart. It’s beautifully made, with some gorgeous backgrounds and effective fusing of 3D computer generated imagery alongside hand-drawn animation to add more dynamic movement at times. The music is lushly orchestrated too, making for a veritable feast for the eyes an ears. A striking opening prologue illustrated in fire and a spectacular climax involving a giant whale spirit stand out in particular.

All this visual and aural splendour would be for nothing without a good story and strong characters though and luckily both are solid here. The central teacher/pupil relationship conceit is nothing that hasn’t been done before, but the likeable yet flawed characters help lift it off the ground and the story takes some interesting turns after the half-way mark. Speaking of which, the film does make a couple of tonal shifts as it goes on, moving from a fairly light comic action film, to a teenage drama, to quite a dark fantasy epic by the final act. These are a little jarring, but I’ve come to expect them in Asian cinema to be honest and are part of the charm. 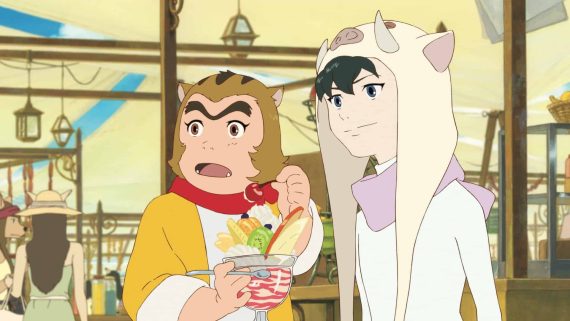 The film gets quite sentimental at times and a little melodramatic, but it’s good natured and sticks to its theme. It looks at the role of surrogate parents and how you are shaped by a number of people around you, not just your parents. Linked to this, it also stresses the importance of not feeling alone and learning from those who helped us, even after they’re gone.

So the film has a fair amount of emotional depth, allowing for a more rich and satisfying experience than most flashily animated fantasy films. Some of the tonal shifts unsettle things briefly and its messages aren’t always subtle, but overall it’s a beautifully crafted, enjoyable and warm-hearted fantastical action-drama.