For this month’s next review for Genre Grandeur – Fantasy Movies of the 21st Century, here’s a review of Tigers Are Not Afraid (2017) by David of BluePrint: Review. 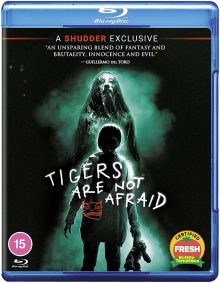 The Mexican drug wars, which have raged for several decades, have claimed the lives of hundreds of thousands of people across the country. On top of the many who have died, a huge number of children have been left behind, without support from family or the government, left to live on the streets in often largely abandoned areas of the ravaged cities.

Keen to tell their story, writer-director Issa López put a script together that finally allowed her to cater to her own tastes. Since the turn of the 21st century, she’d been writing and directing generic crowd-pleasing fare in Mexico, largely romantic comedies that she had little interest in but was all she was given to produce. After a tough period in her life though, when she lost her father, went through a painful breakup and failed to get a Hollywood project off the ground following the success she’d found in Mexico, López decided a change of pace was in order and she wrote Tigers Are Not Afraid.

She approached a studio with the script and they weren’t interested, not seeing any potential in the blend of fantasy, horror and social drama she’d envisaged. However, when López agreed to give them some romantic comedy scripts as part of the contract they were happy to give her a relatively small budget to produce her passion project. 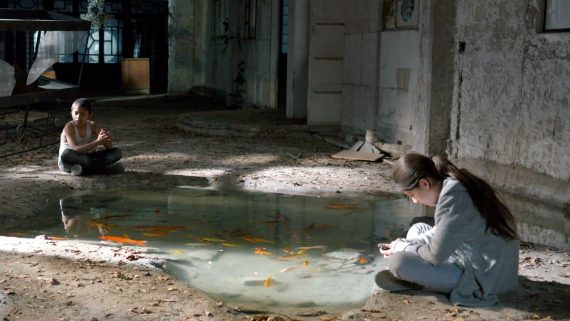 Tigers Are Not Afraid has gone on to receive considerable acclaim around the world, with big-name supporters in the form of Stephen King and Guillermo del Toro. It’s previously been available on the Shudder streaming platform in the UK, but now is being released on Blu-ray, DVD and digital formats. I got hold of a Blu-ray to see what all the fuss was about.

The film centres around Estrella (Paola Lara), a young girl who loses her mother at the start of the film, leaving her alone in a dilapidated area of an unnamed city. After being given three ‘wishes’ by her school teacher, Estrella uses one to ask that her mother could come back. She does, in a way, but only in the form of a ghost that haunts the girl each night.

Frightened, she comes across a small gang of orphaned street children led by Shine (Juan Ramón López) and asks to live with them, much to the disgust of the boy.

Shine tells Estrella that, to be a part of his gang, she must kill a local cartel member Caco (Ianis Guerrero). When she attempts this, she makes another wish, that she doesn’t have to do it, and, indeed, she finds Caco has already been killed. The others believe she did it though, and she becomes part of the gang. Shine, who didn’t believe she would do it, reluctantly agrees to allow her in, but is devastated that he wasn’t the one to kill Caco, who had murdered his mother.

This is not the end of the group’s troubles though, as Caco was murdered because he had video footage on his phone of cartel boss Chino (Tenoch Huerta) beating and killing a woman. Chino knows the kids now have this phone and will stop at nothing to track them down and get it from them. The group don’t trust what the criminal will do to them when they find them, so don’t want to simply give the phone back. Plus, Shine is protective of the device as it contains the only photo he has of his mother, after his belongings were burnt along with his former home.

Tigers Are Not Afraid has often been compared to Pan’s Labyrinth in its blending of the darkly fantastic and the disturbingly real (it reminded me of Under the Shadow too, in this way). In both, the true villains or monsters are not the spooky things we see in our nightmares, but the living terror of life during times and places of war and suffering. The visions of Estrella’s mother are very frightening here but the actual threat is coming from the drug cartels that have overtaken the city.

The balance between horror, fantasy and drama is maintained very effectively and whilst López’ film doesn’t quite reach the heights of Pan’s Labyrinth, it comes pretty damn close. Tigers Are Not Afraid admirably never shies away from the grim reality the children face, with some shocking incidents peppered throughout. There’s poignancy and some glimmers of hope though, particularly in the final moments, that prevent it all from getting too relentlessly bleak.

The shoot must have been difficult too. Working with a child actor is difficult at the best of times, but making a film with a cast almost solely made up of young kids must have been a tremendous challenge. Their delivery is occasionally a little forced here but, on the whole, the kids are great and those ‘performed’ moments actually fit the bravado children like that would naturally display, so it works. Though none of the kids were from similar backgrounds to the characters they portray, they were all non-professionals and Juan Ramón López is an orphan in real life, so brought some of his own experiences to the screen.

The casting director reportedly saw 600 children for the roles, so it was a painstaking process to find the right group. They ran extensive workshops with the chosen actors too, to develop their characters and keep the performances as natural as possible. López also chose not to show the kids the script to keep their delivery more spontaneous. She tried to shoot in chronological order whenever possible too, helping them keep in sync with the story as it goes along.

López lost her own mother as a child (as well as her father at a later date, as mentioned), so the film had some personal connections and this shows. You’d never believe she’d only directed romantic comedies and similar throwaway fare before this, as it’s a confident, assured piece of filmmaking that fully embraces its dark style. 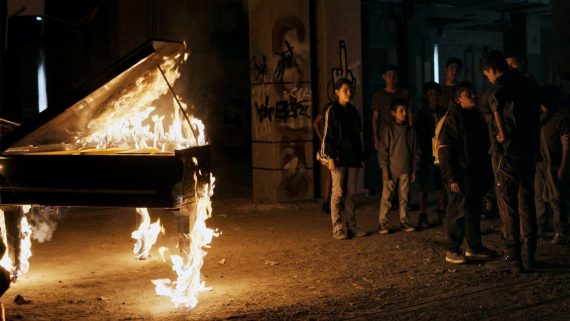 Speaking of which, the film looks very good too. The supernatural sequences are suitably shadow-laden and unsettling. Great use is made of plastic sheeting over the ‘ghosts’ in the film, making for spirits that don’t quite look human and play on fears of suffocation and the symbolism of these people being disposed of like litter.

I did have a slight problem with the ‘shaky-cam’ style of shooting though. I don’t mind the use of handheld cameras in films, but here it felt a bit forced, with camera wobble in places where any half-decent camera operator would have been able to keep it steady, suggesting the effect had been intentionally exaggerated. It’s an approach that took me out of the film in places.

This is a small niggle in an otherwise excellent film though. Tough but poignant, gritty yet fantastical, it’s a beautifully realised work from a writer-director to watch, that provides a frightening and moving child’s eye view of a very real problem.