For this month’s next review for Genre Grandeur – New York Films That Take Place Prior to 9/11, here’s a review of Little Murders (1971) by David of BluePrint: Review. 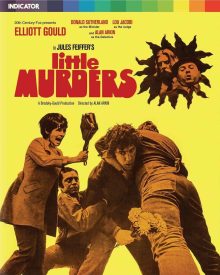 I’m not sure if it was intended as such, but Indicator have matched their release of The Effects of Gamma Rays on Man-in-the-Moon Marigolds with another largely forgotten 70s film adapted from a stage play by a director more famous for being an actor. The title in question is Little Murders, which marked actor Alan Arkin’s feature film directorial debut. The script was adapted by cartoonist Jules Feiffer from his own play of the same name. The similarities between Little Murders and Gamma Rays soon end after that though, as Arkin’s dark satire on modern society is a rather different animal to Paul Newman’s naturalistic drama.

Little Murders sees Patsy Newquist (Marcia Rodd) save Alfred Chamberlain (Elliott Gould) from a gang of thugs who were beating him up. She’s angered when he subsequently saunters off, leaving her to the hands of the youths, but his nihilistic attitude fascinates Patsy. She’s determined to ‘mould’ him and practically forces him into a relationship with her. Not caring about anything other than the photos of shit he takes for a living (he’s paid for the pictures, not the excrement), he agrees and tags along as she tries to prove he can be happy. With mindless acts of violence and murder a common occurrence in the city, it might be more difficult than she imagined though. Not helping matters are her overly clingy, oddball family, who Alfred meets and struggles to connect with. He’s forced to bond with them later though, after a shocking turn of events. 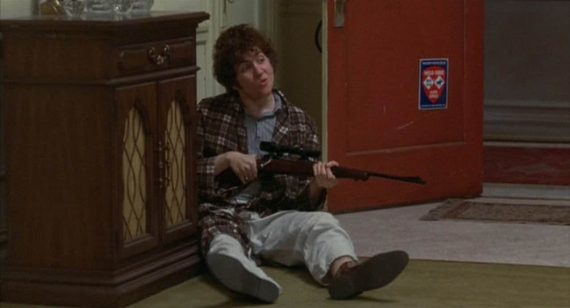 Little Murders is one of those films I liked at first viewing, but wasn’t totally convinced by, largely due to its bizarre nature. Then, after letting the film settle in my mind for a couple of days and after ploughing through the acres of special features included in the set, I grew to better appreciate its qualities. That’s not to say it’s as perfect as some of the special feature contributors would lead you to believe, but it’s a fascinating and unique comment on the state of New York and many other parts of America during the early 70s.

Around the time, there were a spate of random murders in New York and the city was not a safe place to be. The country was in turmoil in general, with the Vietnam war, civil rights movement and other issues causing rifts within the country and incidents of civil unrest. Little Murders takes aim at this broken society with viciously dark, often surreal humour and suggests a terrifying near future where many have simply given up hope. You don’t know whether to laugh or cry as the film’s bizarre events unfold. Particularly disturbing is how close it all seems to the world we currently live in.

The presentation of this satire can be a little hit and miss though. The film is very dialogue heavy and although this is often funny and/or thought provoking, the barrage of extended monologues can be a lot to take in one sitting so the content can become lost in the flood as the film goes on. The fine cast pull it off for the most part though. Gould, who was a mega-star at the time and co-produced the film, is perfect as the emotionless Arthur and pulls off a deceptively difficult part magnificently. Everyone has been well chosen for their parts to be honest and all do a fine job. A couple of famous faces show up in cameos, including Arkin himself as a police detective driven insane by the mountains of impossible to solve murders piling up on his desk. It’s Donald Sutherland’s straight talking vicar who’s most memorable though. He delivers a magnificent speech about marriage during Alfred and Patsy’s wedding, which eschews religion for the most part, but cuts a unique path to the heart of a successful relationship and a less sugar-coated description of what could otherwise be called love. 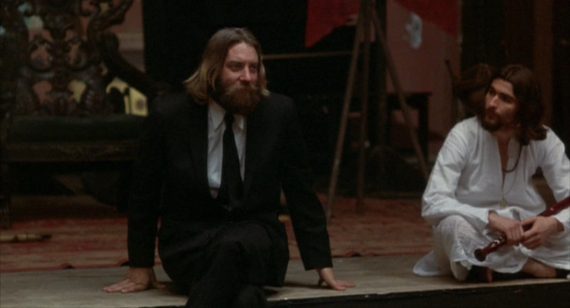 Overall I think I need a rewatch to fully get my head around the film, although the special features helped a great deal. It’s a bizarre film that doesn’t always hit the mark in its wild, scattershot approach and machine-gun volley of endless dialogue, but has enough surreal and satirical humour to keep you hooked. It’s more than a simple farce though, with some fascinating ideas explored and frightening views of a crumbling society that still ring true today. Like me, you may wonder what the hell you just watched at first, but stick with it and you will find there are many rewards to be had.