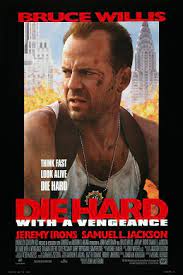 For this month’s final review for Genre Grandeur – New York Films That Take Place Prior to 9/11, here’s a review of Die Hard With A Vengeance (1995) by Darren Lucas of Movie Reviews 101.

In case you missed any of the reviews, here’s a recap:

In addition, I watched 3 movies in my companion series Genre Guesstimation. Unfortunately, none of those films will now be considered among my favorites in the genre.

Die Hard: With a Vengeance

John McTiernan returned to the Die Hard series for Die Hard With a Vengeance. Bruce Willis is back as John McClane for a new adventure against a criminal mastermind. Joining the casts are Samuel L Jackson and Jeremy Irons.

Die Hard With a Vengeance follows a hungover John McClane forced into complete a series of games by psychopath Simon (Irons). This sees him needing to fly around New York City, joined by Zeus (Jackson) on these tasks. As the games get more intense, John can’t risk not completing them, because the threat of bombs is high on the agenda.

Die Hard With a Vengeance continues to make the environment bigger. As the first Die Hard was only one building, the second was an airport, now we are in a big city. This helps play into the larger chaos going on throughout the film, which continues to show John on the battlefield. The twist about whom Simon is adding plenty to the movie, making it a personal vendetta for Hans Gruber’s demise.

The action is bigger even if more of it is chase sequences, rather than the branded action movie ‘Die Hard in the…’ that has become so popular over the years. If they had kept to just the three movies, this would have been an excellent ending to the series. Even if it would have been nice to see one more chapter with Holly and John, instead of just writing her out of the film.

One of the most amazing things about Die Hard with a Vengeance is that it was the highest-grossing movie of 1995. This is a great action movie and still has people debating over which one of the Die Hard movies is the best after the original one.