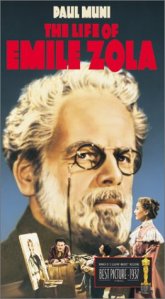 “What does it matter if an individual is shattered – if only justice is resurrected?” – Emile Zola

My Take on it – This is perhaps the first great courtroom drama movie.  I am surprised that in 1937, they could make a movie done so well.  The French system of justice runs slightly different than the US version, but the drama in the courtroom is still very riveting.

Paul Muni was great as the title role just one year after winning the Best Actor Oscar for The Story of Louis Pasteur (1936).  he completely carries the movie as the lone voice of advocacy for Dreyfus (Joseph Schildkraut) .

This was the first movie to ever receive 10 Oscar nominations, but it only won 3 of them (Picture, Supporting Actor (Schildkraut) and Screenplay)

Whats interesting is that it is well known that the Dreyfus Affair was fueled by antisemitism, but this movie only gives a half second glimpse to show that Dreyfus was a Jew.