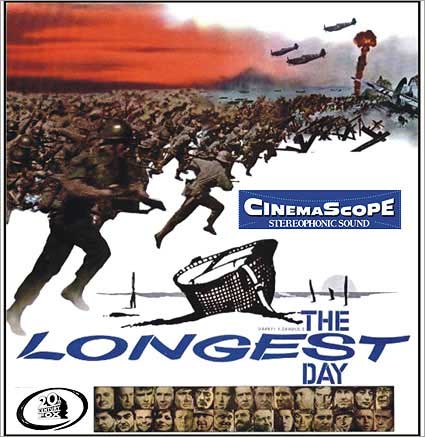 “The thing that’s always worried me about being one of the few is the way we keep on getting fewer.” – Flight Officer David Campbell

Brief Synopsis – A comprehensive chronicle of one of the most pivotal days in history, June 6th 1944 where the Allied forces began the invasion of Normandy on their way to defeat the German Army during World War Two.

My Take on it – As a history buff, I love watching movies like this one. For 1962, the camera work and other technical aspects are a joy to view especially during some of the recreated battle scenes. I especially loved the way the attack on Ouistreham was filmed.

The cast features so many known actors who joined in on the retelling of this epic day including most notably John Wayne, Eddie Albert, Robert Mitchum, Red Buttons, Richard Beymer, Richard Burton, Sean Connery and Paul Anka.

There is so much going on and they did a great job capturing the comprehensiveness of the day. Unfortunately, because so much happens, it also makes it sometimes a bit difficult to accurately follow all that is happening.
It’s interesting that there are numerous situations and even dialogue that is repeated (copied????) in other movies that portray D-Day 😀

Bottom Line – Great telling of the massive battle fought on D-Day. The fact that so much happens is a pleasure to watch but also is slightly detrimental because it jumps around to so many plot lines making it a bit difficult to effectively follow everything happening. Highly recommended!