Kim from Tranquil Dreams gives us her thoughts on today’s Bond movie – Diamonds are Forever. 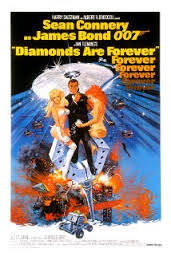 After a satisfactory experience with Sean Connery’s Bond and You Only Live Twice, I went right along and put on Diamonds Are Forever.  Still, Sean Connery and a little later.  Apparently, he came back to do this one? I don’t know.  I’m still a little iffy with the idea and to start this off, it took me two times to get through this.

You know what? I don’t know how to write the plot for this one so here’s from IMDB:

A diamond smuggling investigation leads James Bond to Las Vegas, where he uncovers an extortion plot headed by his nemesis, Ernst Stavro Blofeld.

I’m a bit torn on how to review this Diamonds Are Forever.  Unlike the last one, Sean Connery is a much more acceptable version of James Bond.  Maybe its because I’m used to his style and especially his charm.  It feels more like a Bond movie. He was really entertaining to watch and he has all these fun gadgets that make it even more convincing.

On the other hand, I’m having a really big problem with the pacing. I just couldn’t help want to fall asleep throughout the story.  The beginning had a few interesting scenes and then I started wanting to fall asleep and stopped, popped it in the next day to continue and fell asleep so back to where I stopped.  Eventually, I just put it on while I was cooking.  The ending sequence was alright but seeing as I wasn’t completely focused in the middle because I couldn’t.  It just felt long and dragged out a bit.  I think its just the set up of the whole affair that I wasn’t too accustomed to.

While, the characters were fine.  Blofeld, the villain from You Only Live Twice, makes his second appearance.  This time he’s played by Charles Gray.  My exciting moment was that he was The Criminologist in The Rocky Horror Show.  He is pretty awesome.  I like Blofeld quite a bit as the villain.  There’s something about the character that works really well.

Is there a lot more to say about Diamonds Are Forever? Not really. I think that the main issue was the pace.  If it had more happening, maybe I’d be more interested.  Still, none of that is the fault of the characters.  Sean Connery is pretty good as James Bond.  It just worked better for me, for whatever reason (I don’t even know). And Blofeld is just a villain that worthy for the Bond plot lines.