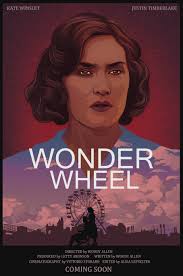 “You people would never try to hide her, would you?” – Nick

Brief Synopsis – The story of a carnival worker, his wife, her lover and a long lost relative who shows up and changes their lives.

My Take on it – Woody Allen film IMHO are either hit or miss and this is one of the misses.

The premise itself isn’t that great and the way that they choose to tell the story just doesn’t work as well as it could.

As with all Allen films, this film has an amazing cast but even with that, they can’t help this story that constantly feels lacking.

They try too hard to make this plot more clever than it truly is and it constantly falls into the trap of it just not being interesting enough as it could have been.

Like in most of Allen’s films, the characters are very plain and despite this they don’t feel recognizable or relate-able enough like most of the characters in a majority of his other films.

I also wasn’t too fond of having the narration of the story told through the persona of Justin Timberlake, a handsome lifeguard, since Allen’s best narrators are the ones who use his own ‘voice’ and are usually a bit (sometimes very) neurotic.

This film is lacking in too many categories and doesn’t have enough of a Woody Allen fingerprint on it in order to make it interesting enough (or even humorous) enough to keep things enjoyable for the 100 minute runtime.

Bottom Line – Not one of Allen’s best IMHO. The cast is spectacular as always, but the story itself is lacking.  The plot tries to be quite clever but loses its way along its path because it just isn’t as interesting as it could have been.  The choice of using Timberlake’s character for the narration loses a lot of the impact since it isn’t able to properly utilize the true ‘voice’ of Allen which is usually a lot more neurotic which helps endear the characters more to us in other films that he has made in the past.

MovieRob’s Favorite Trivia – The slang word “mazuma” is used. From the Yiddish for money, it was a popular slang term of the mid-century. (From IMDB)