For this month’s next review for Genre Grandeur – Political Thrillers, here’s a review of The Day of the Jackal (1973) by VinnieH

Thanks again to Tony of Coog’s Reviews for choosing this month’s genre.

Next month’s Genre has been chosen by Satu of FairyTale Pictures and it is Bestselling/Popular Novel Adaptations.

Please get me your submissions by the 25th of June by sending them to novelideasatu@movierob.net

Try to think out of the box! Great choice Satu!

Let’s see what Vinnie thought of this movie: 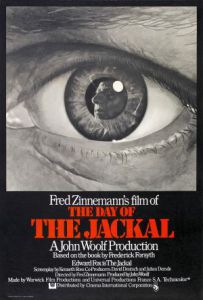 A superbly crafted and tense political thriller based on the renowned novel by Frederick Forsyth , The Day of the Jackal has fine precision and the ability to make you sit up and concentrate.

It is 1963.  An underground group known as OAS in France is outraged by President Charles de Gaulle’s decision to award independence to Algeria. Various attempts are made on his life, yet none are fruitful or successful. After one such attempt, many members of the group are apprehended, arrested and the leader is executed via firing squad. In anger, the remaining members of OAS enlist the services of The Jackal. He is a mysterious assassin with no background but immense skill at his job. Around the time of hiring him to kill de Gaulle, the police learn after some interrogation of an OAS member of The Jackal and an assassination, but nothing further. The Jackal meticulously plans the assassination, getting what he needs from a number of people and often killing them when they cross him. Meanwhile, Deputy Commissioner Claude Lebel is brought in to head the investigation by the Interior Minister. He is to uncover when the assassination will take place and hopefully prevent it. Lebel is a fastidious man who doubts he is cut out for this enormous job at first, but shows his worth and sharp mind in searching for the assassin. And so begins a cat and mouse game as both head towards their goals, each with the idea for a different outcome.

Fred Zinnemann is the shining star of The Day of the Jackal; his understanding of pace  and how to sustain a high level of unease is admirable and dexterous. The film may run for two and a half hours, but it sure doesn’t feel like it due to his handsome and taut handling of the material. Which isn’t to say that the film is rushed, instead its methodical and enthralling with how painstakingly it documents The Jackal’s planning of his job and Lebel’s analytical mind. You see it’s not about the main action of the piece; it’s all about the planning of it all. By cutting between the Jackal and Lebel, immediacy is created and used to spellbinding effect . You see how carefully and fastidiously both parties go about their business and objective. There’s real efficiency and uncertainty created in the viewers mind as Lebel closes in on the Jackal, but finds him most elusive at nearly every step. The editing is the second star of Jackal for how it combines the two characters in their fields of work and the inevitable confrontation between them. Add to that voiceovers that carry over to other scenes and it’s a seamless way of telling a story  This is a thriller that is about intellect and plotting rather than over the top violence and blood. Granted, there is violence but most of it is hinted at rather than show, giving it a more chilling quality. The murders committed by The Jackal are skilled and briefly brutal, much like the man doing them. He is a man who is coldly ruthless and immensely determined, which is a deadly combination.  much like Jackal is a movie that demands your undivided attention as so much goes on. It’s largely compelling and there are only a few things that may have benefited from more explanation. But the vast majority of things are coolly and compulsively rendered for us to view and appreciate. Any little langurs can be ignored because of how skilfully The Day of the Jackal tell it’s story and patiently but rewardingly pulls you in.

This movie features a wide cast, but there are those who really stand out. Heading things is Edward Fox as the eponymous killer. His boyish looks are employed with ruthless charm here, making him a charismatic but very dangerous fellow. This coupled with an icy stare and cool efficiency is perfect for the part. Seriously, I can’t imagine anyone bringing the menace and suaveness to the role that Fox does. Michael Lonsdale plays his part of detective with a sense of savvy and intellect. There’s a doubting quality there, but an immense dignity and steadfastness too. All of that compliments things greatly. In support there is Alan Badel as the hassled Interior Minister and look out for Cyril Cusack and Ronald Pickup as two men who aid The Jackal. Also a young Derek Jacobi makes an appearance as Lebel’s assistant and a tragic Delphine Seyrig as a woman romanced by the Jackal are worth praising.

A skillfully executed thriller with immense suspense and a keen eye for showing how the legwork of investigation can be, The Day of the Jackal is rightfully held in high regard.