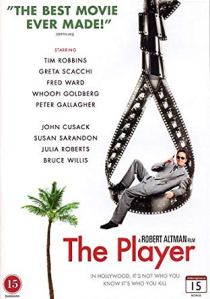 “I was just thinking what an interesting concept it is to eliminate the writer from the artistic process. If we could just get rid of these actors and directors, maybe we’ve got something here. ” – Griffin Mill

Brief Synopsis – A movie executive harassed by a writer must try to find out which writer is sending the threats.

My Take on it – This is a film that I saw by way of recommendation from a friend who was an aspiring screenwriter not long after it came out.

As much as I love the idea of Hollywood, something feels missing from this film for it to relate much better to non-Hollywood insiders.

Robert Altman takes an interesting idea and manages to satirize the life of those behind the scenes and how things work when making movies.

Hollywood itself loves films about themselves and the industry and there is no surprise that Altman managed to get an Oscar nomination for Best Director for this film.

As with most Altman films, he is able to get a very talented cast to sign on to appear here and even succeeds in adding so many cameos of famous Hollywood insiders peppered throughout the film.

Altman shows that he doesn’t fear making fun of the way things work and the film feels quite realistic in many ways despite the fact that it presents everything in a very over-the-top fashion.

This film isn’t perfect, but it’s still a very entertaining look at how things work behind the scenes in Hollywood.

Bottom Line – Interesting idea that Altman gets right largely due to the fact that he is able to satirize the whole film industry and how things work. The cast is spectacular and the film is filled with so many cameos of famous people in the industry.  Altman isn’t afraid of making fun of the way things work and manages to show things in an over the top fashion which works most of the time.  It’s very understandable how Hollywood insiders could love this film but it still isn’t perfect. Recommended!