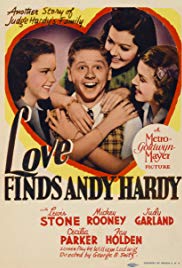 Brief Synopsis – Young Andy Hardy gets in trouble when he ends up with the prospect of taking three different girls to the local Christmas dance.

My Take on it – In order to try and expand my knowledge of older films, I decided to try and see what is possibly considered as one of the best of the 16 Andy Hardy films starring Mickey Rooney.

The story is pretty simplistic and in all honesty not much actually happens here to make it feel pretty unique.

I’m aware that many films from this era were made to be like long TV episodes and this film feels exactly like that.

The comedy of errors that start with Rooney ringing one girl to a dance and ending up with 3 dates is cleverly done even f it still all feels very average.

Rooney does a fine job here but again, he doesn’t do anything special here and if this is considered the best of the series, I’m not planning on running out to watch the others.

This is the first of two films where Judy Garland shares the screen with Rooney and they have nice chemistry here but their connection feels too platonic and lacking any romantic feelings between them which takes away from this film a bit.

Bottom Line – Simple film with a simple plot that doesn’t manage to really give anything unique yet still comes across as being quite average.  Rooney is fine in this role that he played so many times yet once again, the whole thing feels too simplistic.  Garland and Rooney have nice chemistry here yet it still feels more platonic than romantic.  Feels like a long TV episode that doesn’t have much of an impact at all.

MovieRob’s Favorite Trivia – The fourth of sixteen Hardy family films starring Mickey Rooney. Due to Rooney’s rising star status and the increasing focus on his character in the films, this is the first one with “Andy Hardy” in the title. The first of three Hardy films featuring Judy Garland as Betsy Booth. Just the second film pairing Mickey and Judy, they would eventually appear in ten films together. (From IMDB)