This is the final of three posts dedicated to The 100 Years of Rita Hayworth Blogathon being held over at Love Letters to Old Hollywood.

“Do you know what it’s like to look into a woman’s eyes when she’s lying.” – Paul

Brief Synopsis – A formal suit is passed from one owner to another and each one is affected very differently when they acquire it.

My Take on it – Of the three films that I chose for this blogathon, this was the one that I expected to enjoy the very least.

Surprisingly, I enjoyed it the most of the trio of films largely due to the way that this story unfolds.

The idea to use an inanimate object as the main character in a film is not new, but it is something that is usually quite hard to achieve success with.

The movies Twenty Bucks (1993) and Winchester ’73 (1950) are two great examples of films that focus of the life of an object as it is passed from owner to owner.

This film follows the path of a formal coat which can sometimes be referred to as “tails” which adds another level to the title of this film.

This movie features a few short stories about the owners of this formal coat as it moves from owner to owner.

Each of the stories are interesting and unique and help highlight the various kinds of people who would use such an item.

Every one of the stories is quite different and they do a wonderful job showing how this object moves from new owner to new owner.

The cast is amazing and just to have the likes of Henry Fonda, Charles Boyer, Rita Hayworth, Ginger Rogers, Charles Laughton, W.C. Fields and Edgar G. Robinson in the same film is a feat that not many people could conjure even if they mostly don’t share screen time with one another.

Each of these actors are able to shine in their personal story especially given the fact that Formal coat is the real star here.

My favorite two stories shown are the ones with the conductor and the one with the reunion, but the rest are also quite interesting to watch.

This kind of premise is quite fascinating and if anyone knows of other films that also follow inanimate objects from owner to owner, I’d love to hear about them.

Bottom Line – Great idea to follow the path of an inanimate object as it is passed from one owner to another. The short stories are all very interesting to watch unfold and each is quite unique in the way that the story is presented. The cast is superb and even though each of the characters is only connected to a chapter, they still all manage to shine in their own vignettes. Would love to find other films with a similar scope. Recommended!

MovieRob’s Favorite Trivia – Amused by Charles Boyer’s thick French accent, Rita Hayworth giggled her way through the filming of their love scenes together. (From IMDB) 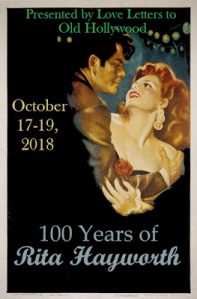