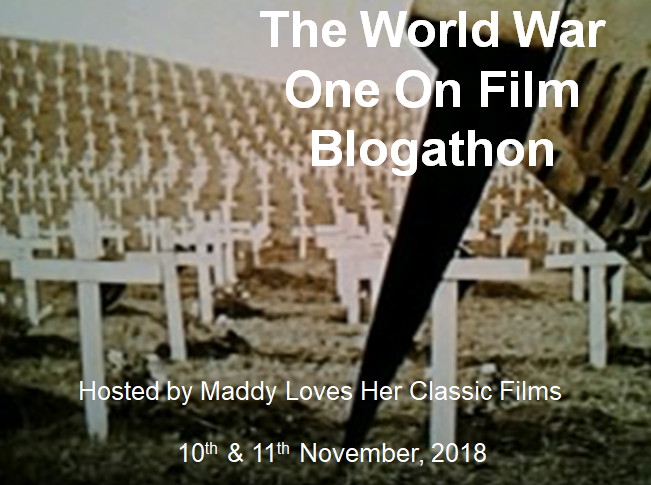 This is the second of 2 posts dedicated to The World War One on Film Blogathon being held over at Maddy Loves Her Classic Films.

“When did an Irishman need a prayer in a fight? ” – Father Duffy

Brief Synopsis – A group of Americans join the army in order to go over to Europe and beat the Germans in World War I, but things are definitely not what they expect.

My Take on it – When trying to decide on a second film to watch and review for this blogathon, I came across this film and the premise made it sound intriguing, so I decided to give it a shot.

The story itself is quite interesting but was probably much more entertaining to watch when it came out than it is now since the idea have been used and reused so many times over regarding various wartime experiences of soldiers.

Due to the standards of the time, the action is shown quite tamely and one must use their imagination in order to try and view the carnage that this war created.

The characters are all very stereotypical and they use the standard archetypes that have been shown so often in the genre.

James Cagney stands out here in the lead role of the troop clown who is much more dangerous by his bark than his bite.

I really enjoyed his character arc and even though it is done in a bit of an annoying fashion, it still works quite well.

Despite the censors of the time, they found a way to show the devastation of war quite interestingly and we get to observe much cannon fodder in the trenches.

Bottom Line – Interesting story that was probably much more entertaining to watch when it came out than it is now.  The characters all feel very stereotypical and the action is presented quite tamely due to the standards of the time. Cagney is the standout as the troop clown who is much more talk than action and I liked his character arc throughout the film. They don’t shy away from showing how brutal this war was and we get to see lots of canon fodder even when shown in a tame fashion.

MovieRob’s Favorite Trivia – Actual archived war combat footage was used in the film, as was footage of soldiers marching through the Arch of Triumph. (From IMDB)