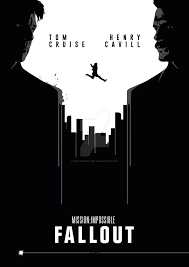 “”Your mission, should you *choose* to accept it.” I wonder, did you ever choose not to? The end you’ve always feared is coming. And the blood will be on your hands. The fallout of all your good intentions.”- Solomon Lane

Brief Synopsis – Ethan Hunt and his team are sent to try and intercept 3 nuclear bombs that are on their way to the remnants of the Syndicate.

My Take on it – This film actually returned much of my faith in this franchise as it has made the full transformation from IMF to a James Bond clone and it works quite well.

They manage to change the scope of things in the storyline and it actually works most of the time as the IMF team travels around the globe in order to stop 3 nuclear bombs from being detonated in order to create chaos in the world.

Tom Cruise once again spearheads this film and does a great job with it.

He is joined by Ving Rhames, Simon Pegg, Rebecca Ferguson and Alec Baldwin who all return to help him save the world from destruction.

The additions of both Henry Cavill and Angela Bassett work really well since they help raise the level of tension and suspense because we never know who we can truly trust throughout the story.

The action sequences are superbly done and the helicopter chase scene is extremely thrilling to watch.

It may be a bit long yet it stays thrilling as the fast paced action is consistent throughout.

Bottom Line – Another great addition to this franchise which has changed its stripes into a James Bond clone instead of keeping with the IMF formula.  This changes the scope of the kind of stories being told and it mostly works as it has Ethan and his team trying at all costs to stop 3 nuclear bombs from being detonated in order to cause chaos in the world.  Cruise once again spearheads this film and is joined by Rhames, Pegg, Ferguson and Baldwin as they try to save the world.  The addition of Cavill and Bassett help raise the level of suspense since you never know who of the new characters can be trusted. The action sequences are spectacular to watch and the helicopter chase is quite thrilling to watch.  Recommended!