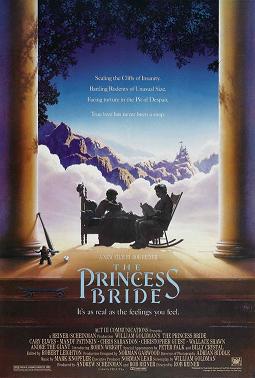 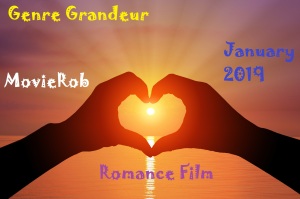 For this month’s next review for Genre Grandeur – Romantic Films, here’s a review of The Princess Bride (1987) by Quiggy of The Midnite Drive-In

Thanks again to Samantha Ellis of Musing of a Classic Film Addict for choosing this month’s genre.

BTW, Genre Grandeur will be taking a hiatus for one month since I’m doing something special in February (I’ll reveal things on Saturday)

Please get me your submissions by the 25th of March by sending them to teenagechris@movierob.net

Try to think out of the box! Great choice Christopher!

Let’s see what Quiggy thought of this movie:

William Goldman published the novel The Princess Bride in 1973.  Some of the facts behind it: It was originally published as a supposedly abridged “good parts” version of an original novel by “S. Morgenstern”.  (“S. Morgenstern” is, in fact, a fictional person.  Goldman was the actual writer.)  Goldman writes the prologue to the book telling a story of having heard his father read this book to him as a boy, and buying a hard-to-find out of print copy of the S. Morgenstern classic for his son.

His wife, a child psychologist, pressures him not to berate the boy when the son does not respond enthusiastically to the book as he did.  When he gets a hold of the book and reads it, he finds it is not exactly the same book as the one his father read to him.  Sure, the story is there, but there is a lot of political intrigue and mumbo-jumbo that his father had left out.

Goldman decides to edit the book and bring it out as “the good parts version”, editing out all the mumbo-jumbo and just printing the fantasy/adventure/love story in the middle of the book.  Occasionally during the story, Goldman interjects with some commentary on the parts he is leaving out, as well as some reminisces of how he, as a boy, responded to certain scenes and interrupted his father as his father read them.

There are several things to note in the book.  For one, the author Goldman has no son.  (He does have daughters).  For another, his wife is not really a child psychologist.  And, obviously since he is truly the author, it is a fiction that his father read this to him as a child.  Hence even the prologue is a part of the fiction of the novel.

A note on the book itself.  If you have seen the movie, but not read the book, you will almost surely believe the book is a novelization of the script for the movie.  Undoubtedly both are almost exactly the same.  But the truth is, as noted earlier, the original novel was published in 1973, and the movie was released in 1987.  William Goldman, a fantastic scriptwriter in his own right (Butch Cassidy and the Sundance Kid, All the President’s Men both of which won Oscars, and numerous others) wrote the screenplay for this from his own book, proving he has an excellent ear for dialogue.

If you haven’t read the book, I highly recommend that you do.

The movie opens and is framed by a scene in modern-day in which a boy (Fred Savage)  is home sick.  His grandfather (Peter Falk) comes by to visit and reads to him the book The Princess Bride , which had been read to him as a little boy, and he had read to the boy’s father when the father was a boy.  What it’s about, says the grandfather is “fencing, fighting, torture, revenge, giants, monsters, chases, escapes, true love, miracles…” 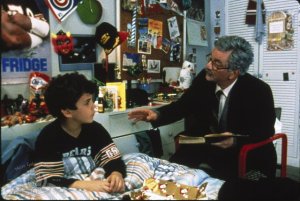 The transition from the book to movie includes several instances where the boy interrupts his grandfather in the reading of the story (and thus the action of the story part of the movie).  Also frequently during the actual action of the film is a voice over that serves to remind us the story is being read aloud, rather than it being an event playing out before us. This helps to endear the grandfather and the boy to the audience, or at least it did to me.

The story part introduces Buttercup (Robin Wright), who is initially a flighty, spoiled girl who enjoys harassing the farm boy who helps out on her daddy’s farm.  Eventually she grows to realize that the farm boy, whose name is Westley (Cary Elwes), loves her, and she loves him.

He decides to go to the country across the sea to earn enough money to marry her.  But she receives word that he was killed by an attack of the “Dread Pirate Roberts”.  She states that she “will never love again”.  But some time later, the prince of the country,Humperdinck (Chris Sarandon), who is privileged and spoiled rotten (and egotistical and ruthless and…but I’m getting ahead of myself) decides that Buttercup is the woman he wants to marry.  She agrees even though she tells him she can never love him.

Shortly after the engagement, Buttercup is kidnapped by a trio of cutthroats; Vizzini (Wallace Shawn), Inigo (Mandy Patinkin) and Fezzik (Andre the Giant).

As they try to make their way to the frontier of the neighboring country of Guilder, they are pursued by a mysterious Man in Black.  In succession the Man in Black defeats the three in separate encounters, beginning with Inigo, who is an accomplished swordsman (in an excellent sword fight on the Cliffs of Insanity, which is as great for the fact that both actors did the actual stunts, as it is for the fantastic repartee during the fight, courtesy of William Goldman). 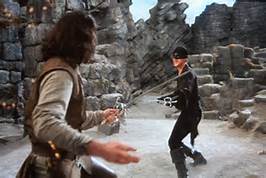 The Man in Black then encounters Fezzik, whom he defeats, surprisingly, in a wrestling match.  In a final battle of wits, the Man in Black defeats Vizzini (which ends up with the death of Vizzini), and takes Buttercup as his own prisoner.  Meanwhile, the Prince, and his right hand man, Count Rugen (Christopher Guest) are pursuing the original kidnappers, but find that they have each been defeated, so they turn to their new prey. 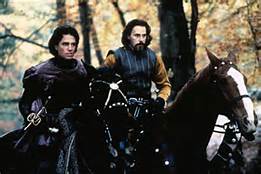 When they are about to ride up to capture them, the Man in Black reveals to Buttercup that he is Westley.  She, of course, is overjoyed that her love is still alive, and they disappear into the Fire Swamp to hide from the Prince.  But after many adventures in the swamp, they come out to the other side only to find the Prince waiting for them.  He tells Buttercup that he will take Westley to his ship, but after she leaves, has him taken prisoner instead.

The truth of the subterfuge comes out.  Prince Humperdinck did not really want to marry Buttercup for love.  Instead he intended to have her kidnappers, whom it turns out he hired, to kill her on the Guilder frontier, so he could frame Guilder for it and go to war with them.  And he still intends to find a way to kill her and frame Guilder for it.  (see what I meant about ruthless…?)

Buttercup discovers that Humperdinck lied to her about releasing Westley (although not that he is a prisoner in the dungeon of the castle) and tells him off.  Humperdinck loses his temper and rushes to the dungeon where he kills Westley in a rage.  Meanwhile, Fezzik and Inigo, the two surviving kidnappers discover much of the plot, and that Count Rugen is the six-fingered man Inigo has spent his whole life seeking for revenge for the death of his father.  They figure the Man in Black is their best hope for figuring out how to storm the castle, but they find him dead.  They take him to Miracle Max (Billy Crystal) who, along with his wife Valerie (Carol Kane) provide some of the funniest moments of the movie.  (Oh, and they manage to revive Westley, who was  only “mostly dead”…)

Will Westley and the gang rescue the princess?  Will Inigo get his revenge on Count Rugen?  Watch the movie and find out.

Rob Reiner, the director, made this project his life-long goal.  He wanted it to be his first project, but several obstacles postponed it.  For some great insight on the behind the scenes you should look for As You Wish: Inconceivable Tales from the Making of The Princess Bride by Cary Elwes.  This book includes some great stuff about the sword fight training both he and Patinkin had to endure.  (Remember I said earlier, they both did the stunts?)