For this month’s next review for Genre Grandeur – Ensemble Movies, here’s a review of The Three Musketeers/The Four Musketeers (1974/5) by James of Blogging By Cinema Light. 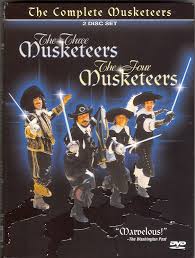 If one were looking for an example of a “ensemble film” it would be fairly easy to choose one of the many versions of Alexandre Dumas’ adventure film about high intrigue and heroic loyalty to principles that have been produced over the decades. The stories feature a complex array of characters and whenever Hollywood gets its hands on it, it fills it with as many stars as it can possibly find.

My favorite, though, (or favorites, as it turned out) is the version done by director Richard Lester for the Salkind production company in the 1970’s.

These rollicking films, originally planned as a two and a half hour epic (no matter what the Producers say!) may just be one of the best adventure films (and adaptations of a classic) ever filmed, balancing the demands of the story, the tenor of the times in which it was made. and the idiosyncrasies of its director.

When approached, Lester (who hadn’t made a film since The Bed Sitting Room in 1969) wasn’t enthused. Then he read the story, and did some research…and heartily agreed. One can see why. For The Three Musketeers, as Lester and his screen-writer George MacDonald Fraser envisioned it, is a story of intrigue done in high places, but carried out by the lackeys and foot-soldiers who live to serve. Forget that the palace-dwellers are either snakes or dullards—they provide an opportunity for income and adventure—two qualities lacking amongst the citizens of France and England, who, at the time, are at war. The opportunities for thrills, humor and rapier-pointed satire are rich and mined well by the film-makers.

Lester’s direction is masterful—simple set-ups and multiple cameras are used during the swash-buckling to make sure there’s a glimpse of every buckled swash. And those scenes are choreographed as a group participation so that every Musketeer has “business.” Lester also worked to make sure that the fights were inelegant affairs—not balletic, as had been the tradition, but more like street-fights, with few rules and the use of landscape and surroundings as equal strategies to the sword technique (and every part of the sword is used, as opponents are sometimes conked with ornate handles).

Lester surrounds the royalty with games and idle amusements that have a slight tint of mindless cruelty to them, and that extends to the villains, whose elaborate machinations involving the Royals are merely extensions of those same games, with regime-toppling consequences.

And the cast! As the musketeers, Oliver Reed as the surly Athos, Richard Chamberlain as the effete Aramis, Frank Finlay as the clownish Porthos, and Michael York as the young and naive D’Artagnan. As the Royals, Jean-Pierre Cassel as the foppish King Louis XIII, Geraldine Chaplin as the frail Queen Anna of Austria, and Simon Ward as the rakish Duke of Buckingham. As the villains, Faye Dunaway as Lady De Winter, Christopher Lee as the villainous Rochefort, and Charlton Heston in one of his best performances as the Machiavellian Cardinal Richelieu. Rounding out the cast are Raquel Welch as the Queen’s seamstress, the accident-prone Constance de Bonacieux,* Spike Milligan as her randy husband, and Lester regular, the great Roy Kinnear as D’Artagnan’s man-servant, Planchet. A superb cast, rarely equaled.

It’s long been contended that the film was supposed to be one movie, but that the Salkind’s split it into two to maximize profits. That’s the rumor—there is a natural split of the film at the half-way point that features almost all the actors for a sort-of bow, but it could have easily been used as the starting place for an intermission. It’s born out by the fact that there is less movie in The Four Musketeers, it being padded with an “up-to-that-point” narrated prologue.

The two-film scheme is helped by the fact that there are two very distinct stories of different tones, both of which are resolved, the first being the intrigue-filled, but relatively light-hearted The Queen’s Diamonds story (in which Athos, Aramis and Porthos are wounded, but not killed), and the second, Milady’s Revenge where the Palace forces seek to disrupt whatever kept them from succeeding in the first one. That story, with its be-headings, extended back-story and several prominent deaths, is less fun (although certainly as clever) and considerably darker. Where Part 1 is rollicking fun with minimal consequences, the stakes in Part 2 are very high, passions flare, and the sword-play becomes deadly and fraught. The humor is darker than the first, too. Despite the same cast and crew,** the two are very different films. The combination of the two of them would have left audiences winded and less ebullient (and less anticipatory of a continuance).

Taken together, they have a moralist’s sensibility of the costs of frivolity and duplicity; adventure can be fun, but in a poisonous political atmosphere, one adventures at one’s own risk. You can have a good time watching The Three Musketeers, but the story is incomplete without the paid dues in The Four Musketeers. Together, they make one of the finest adaptations of a classic novel ever put to film.

* Welch, not the most versatile of actresses, won the Golden Globe for her hilarious performance in The Three Musketeers and tearfully told the crowd “I’ve been waiting for this since One Million Years B.C.!

** …except for the score composers–Michel Legrand for The Three Musketeers and Lalo Schifrin for The Four Musketeers.