This month’s genre has been chosen by Sally of 18 Cinema Lane and we will be reviewing our favorite Youth-Led Movies.

Let’s see if I felt that this movie would be worthy of being in the company of my others favorite movies in the genre of Youth-Led Movies..… 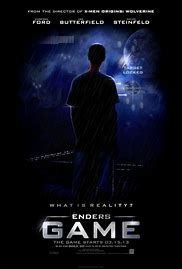 “There is no teacher but the enemy. Only he will tell you where you are weak, where he is strong. ” – Mazer Rackham

Brief Synopsis – In a futuristic world, a young boy is recruited to train to be able to become a leader in the fight against an alien race.

My Take on it – This is a film that I saw when it came out and recall enjoying it.

I figured that after nearly 6 years, it was time to revisit it and what better time than for this months GG which fits the genre really well.

After rewatching this film, I realized that it deals with lots of themes and issues that could probably be tackled much better in the novel than on screen itself since many of the themes rely heavily on the thoughts, feelings and interpretations of the characters themselves.

The film utilizes its special effects quite well and makes the story feel even more believable in the not too distant future.

Asa Butterfield is a great actor and is able to handle being in the lead role here quite well.

The problem is that the script he and the rest of the cast are given to work with is somewhat lacking and constantly gives off the impression that something is off with the way things are presented the entire time.

This film deals with some great issues like leadership, decision making process in combat and without and the ultimate idea of sacrifice for what you believe in.

All of these themes are shown well yet unfortunately due to the utter lack of an understanding of the results and repercussions of all of these actions, things aren’t seen as being powerful enough.

The film has a great supporting cast led by Harrison Ford, Vila Davis and Ben Kingsley and they all help the film move in the right direction, even if it never truly meets its expected destination.

Bottom Line – Interesting story that probably works much better on paper than on screen because much of the plot relies on thoughts, feelings and interpretations of the events portrayed. Butterfield does a great job in the lead but the script feels as if something is lacking throughout. The film brings up some great issues about leadership, the decision making process and sacrifice which all are shown well but it would be so much more interesting to understand the repercussions and results of these issues. The supporting cast is also quite talented with Ford, Davis and Kingsley helping to move things in the right direction.

MovieRob’s Favorite Trivia – The U.S. Marine Corps has Ender’s Game by Orson Scott Card on its recommended reading list for officers, saying that it offers “lessons in training methodology, leadership, and ethics as well.” (From IMDB)

Genre Grandeur Worthy? – Not really. Butterfield is great in the lead, but the story is missing something that would help make it more intriguing.