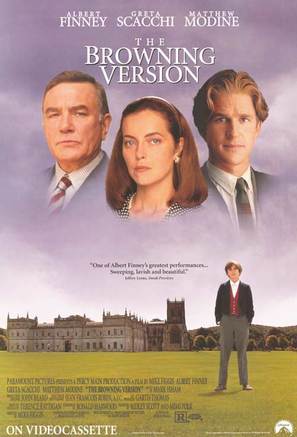 This is my second of 3 reviews for The Broadway Bound Blogathon 2020 being hosted by Rebecca of Taking Up Room.

Tnx for letting me partake Rebecca!

“I’d rather have this present than anything else I can think of.” – Andrew

Brief Synopsis – A strict teacher in a British prep school who is being forced to retire due to heath issues, reflects on his failures and accomplishments in life.

My Take on it – This is a movie that I remember hearing about when it cam out over 25 years ago, yet never had a chance to see what it was all about

When I found out that the story is based on a stage play, I was quite interested in seeing what it was all about.

This is a very powerful and poignant film about looking back on one’s life in order to try and see what one has accomplished while also looking at the failures along the way.

Albert Finney is superb in the lead role and really makes us believe this character as we see both his sternness with his students, his teaching methods and ultimately his vulnerability throughout it all.

We get to see the various connections he has with colleagues, students and his wife as he tries to come to terms with the fact that he is reaching the beginning of a new stage in his life.

In addition to Finney, the supporting cast is great with Matthew Modine, Greta Scaccia, Michael Gambon and Julian Sands all adding so much to this story.

The one things that I didn’t like as much here is the fact that they focus a bit to much on some of the various antics of a group of students instead of devoting more time to exploring both his Personal and work life including the way that he has taught his students over the years.

Bottom Line – Powerful film that shows how one looks back on their life from a very interesting perspective. Finney is superb in the lead role because we get to see both the sternness and vulnerability of the character as he finally tries to grasp the fact that he is ending one major chapter in his life while beginning a new one. The supporting cast is also great with Modine, Scaccia, Gambon and Sands.  The film focuses a bit too much on some of the antics of the students instead of giving us even more depth and insight into the main character’s teachings and family life which might have enhanced things even more. Recommended!