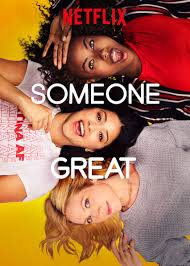 “You’ve been blessed with a broken heart. When it doesn’t hurt anymore that’s when it’s really over. Live in THIS as long as you can.” – Paul

Brief Synopsis – After being dumped the night before she moves across the country, a woman spends her last night in New York with her two best friends as they try to party the night away.

My Take on it – This is a film that I came across by accident while looking for more films starring Brittany Snow.

After seeing her work in Hooking Up (2020), I was curious to see if she was able to bring forth some powerful roles like that one in other films.

Perhaps she can, but nit in this film.

This was an extremely boring film that doesn’t really go anywhere with its characters or storylines.

I was too often reminded of hit sitcoms based in New York that were more successful in dealing with friendship than this one can.

The characters and the situations that they get into are so uninteresting that it was a chore getting through this 90 minute film.

I wasn’t able to care about them or anything that happens to them along the way.

The film has an ok cast yet some of them take these characters to an extreme point and fails to be enjoyable at all.

The story seems like they are trying too hard to make a frilm with diversity and that takes away so much from things which in turn, makes the story even less plausible in all that it does.

Bottom Line – Really boring film that seems like it’s trying to rehash what has been successfully done in numerous New York city based sitcoms. None of the characters are interesting and it’s extremely difficult to care about any of them or what happens to them.  The cast is fine but they take some of these characters and their story lines to the extreme and the story doesn’t come across as being enjoyable to watch at all. The story also seems to be pushing he diversity issue to the line here and that takes away from the idea of some of these scenarios coming across as being plausible at all.

MovieRob’s Favorite Trivia – Taylor Swift wrote a song titled “Death by a Thousand Cuts” inspired by this film on her seventh studio album “Lover”. (From IMDB)