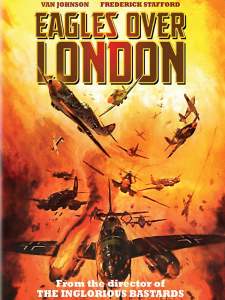 “How would you like to wake up one morning and find out that the Germans have invaded England.” – Captain Paul Stevens

Brief Synopsis – German forces disguised as Allied troops join in on the retreat at Dunkirk in order to infiltrate mainland England and allow for their planes to reach the coast unmolested by the use of sabotage.

My Take on it – This is yet anther film that I had never heard of before coming across it during my research for this blogathon.

The title drew me in immediately and I was very curious to see what this was all about.

The film’s main issue is that the characters aren’t developed well enough.

They are able to present some great action scenes that play out quite well.

The story is paced really well despite a few very blatant plot holes along the way.

The film has a great cast led by Fredrick Stafford and Fransisco Rabal who are able to play officers on both sides of the conflict who are friendly with one another since one of them is in disguise.

Van Johnson has a prominent role as an officer in charge of the Radar stations and he is able to bring forth a commanding performance by this character due to his style and wit especially when he is adamant to stop the enemy at all costs.

The film has a few love story subplots yet they feel far too superficial and abrupt in the way they are presented.

They also feel a bit too convenient for the plot as they attempt to advance certain plot areas through this.

The film’s dogfight scenes are wondrous to watch and this helps enhance things a bit even if the story limps along at certain points along the way.

Bottom Line – Fun war film that doesn’t develop its characters enough. The actions scenes are done really well and the plot moves along at a great pace despite a few plot holes along the way. The cast is great with Stafford and Rabal playing officers from both sides who become friendly during this ruse. Johnson stands out as the commander of the Radar installations and allows us to feel that he really knows how to command such an advantage against the enemy no mater the cost. The love story aspects of the film are far too abrupt and seem too convenient in helping certain plot points advance.  The dog fight scenes are shot really well and give us some great cinematographic footage that enhances things a bit.